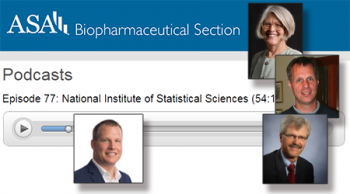 Richard Zink has been moderating a series of podcasts sponsorred by the ASA's Biopharmaceutical Section.  Episode 77 featured his interview of Nancy Flournoy (Curators Distinguished Professor at the University of Missouri), Dan Holder (Executive Director of Biostatistics and Research Decision Sciences at Merck) and Jim Rosenberger (Professor Emeritus at Penn State Universityand NISS Director) discussing the mission and history of the National Institute of Statistical Sciences (NISS) and how it will adapt for the future.

Among the topics discussed were NISS's early beginnings in which Nancy played a key role and the cross-disciplinary emphasis that provided such an important focus of early, current and future work and activities associated with NISS.  Dan followed and described the successful role that the NISS/Merck meetups have played in bringing statisticians together around topics of interest to Merck, but more importantly to all the other statisticians and data scientists across the biopharmaceutical and other fields.  Jim added to the discussion reviewing the applied research that NISS continues to support through the years and how this works as well as the wide range of other activities that NISS is involved in by hosting or sponsoring.

For those of you that would like to add to your understanding of where NISS began and the future role it is shaping for itself, this is a conversation that should not be missed!

Link to the Podcast on CommunityAmstat.org