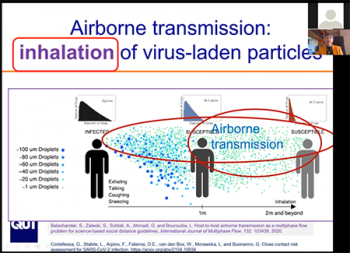 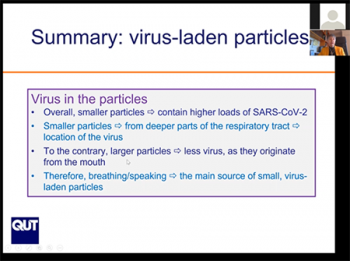 One could probably not find a better expert to talk about the airborne nature of the COVID-19 virus than Lidia Morawska who currently serves as the Director of the International Laboratory for Air Quality and Health and as Distinguished Professor at the Queensland University of Technology in Brisbane, Australia.

Scientists realized soon after the detection of the SARS-CoV-2 virus that airborne transmission, which is by inhalation of small airborne virus laden particles (often called aerosols), generated during human respiratory activities was the main mode of the spread of the infection. The prevailing theory of infection transmission, that it was via the direct contact with much bigger particles (often called droplets), leading to distancing at 6 feet arose from work by Flugge in 1897 and later theory by Well-Riley. Immediately upon the detection of the virus, Lidia Morawska and other aerosol experts recognized that the virus may be transmitted by much smaller particles than recognized by Flugge, over longer distances (as far as 60 feet and further) and lingering much longer in the air! This is a major change in understanding and public health implications of virus transmission.  In fact, Lidia influenced the change of the World Health Organization whose recommendations  were modified to reflect the possibility of virus transmission over longer distances and lingering longer in the air than was earlier thought.

Lidia began her presentation by describing a number of concepts including what airborne transmission involves, many details regarding how particles are generated during respiratory activities and the characteristics of these particles such as the size distribution depending on the type of airway activity.

“We have a quite good understanding of the particles emitted as part of respiratory activities.  The majority of particles are less than 1 micrometer in size with the vast, vast majority of these less than 10 micrometers.  These are light particles and therefore can stay suspended in the air for a long time.  Importantly, all respiratory activities, including breathing, generate particles, but vocalization emits higher emissions. … Particles smaller than 1 micrometer contain higher loads of the SARS-CoV-2.”
Lidia Morawska, (Queensland University of Technology)

From here she reviewed a number of examples where the COVID-19 virus was modeled in terms of what happens to respiratory particles once they have been emitted.  Different infection transmission contexts were explained showing different approaches to better understand this process in terms of modelling the risk of infection transmission.  Improving ventilation is one step that many have taken to mitigate infectious transmissions and Lidia demonstrated how looking at this in terms of fluid dynamics modelling can help us understanding the issues involved.   Although the costs of changing indoor air dynamics is not inexpensive, Lidia made it clear that it is in everyone’s best interest to make these changes.

"We need a “paradigm shift” in how buildings are designed, equipped and operated to minimize all indoor air hazards, include airborne infection transmission.  … The economic costs of the impacts of indoor air pollution by far exceed all other costs.”
Lidia Morawska, (Queensland University of Technology)

Moderator Chris Barker, (CEO of the Statistical Planning and Analysis Services Inc. and 2022 chair-elect Statistical Consulting Section of the ASA) posed questions for Lidia to respond to. Questions from attendees and also from Chris included: “In outbreak simulations do you have data that allows you to differentiate between airborne transmission and fomite transmission from people moving around a lot?”, “Infectious disease scientists seem to think that “aerosolized viruses” have very high R0 rates, e.g. measles, on the order of 12 or more.  They think the estimated R0 of 2.5-4.0 for SARS-CoV-2 meant that it must not be spreading via aerosol spread.  What are your thoughts on this viewpoint and what would you say to a person who makes this argument?” and “Given the close proximity of passengers, air ventilation and mask wearing, what are your comments regarding the safety of flying in an airplane?”