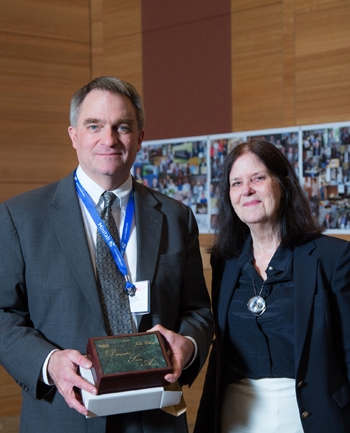 John Eltinge and Jamie Nunnelly have been presented the 2015 Distinguished Service Awards from the National Institute of Statistical Sciences (NISS). Nell Sedransk, Acting Director of NISS, announced the awards on August 10, 2015 at the NISS/SAMSI (Statistical and Applied Mathematical Sciences Institute) reception held at the 2015 Joint Statistical Meetings in Seattle Washington.

The NISS Distinguished Service Awards were established by the Board of Trustees in 2005 to recognize individuals who have given extraordinary service that significantly advances NISS and its mission.

Eltinge, who is Associate Commissioner for Office of Survey Methods Research for the United States Bureau of Labor Statistics, received the award for bringing insight and implementing the vision for NISS as a multi-sector institute, especially through his leadership in the Affiliates Program.

Nunnelly, who is Communications Director for NISS and the Statistical and Applied Mathematical Sciences Institute (SAMSI), received the award for her role in dramatically increasing the visibility of NISS, for engaging the next generation of statisticians in NISS and for modernizing NISS communications, especially through design of the new website.

Eltinge and Nunnelly's  names will be added to a plaque that is displayed in the lobby of the NISS building in Research Triangle Park, which lists the names of all recipients.