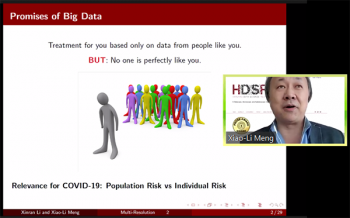 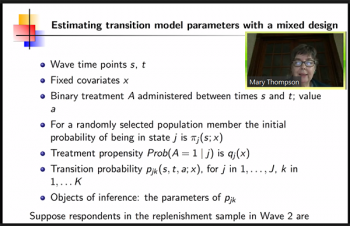 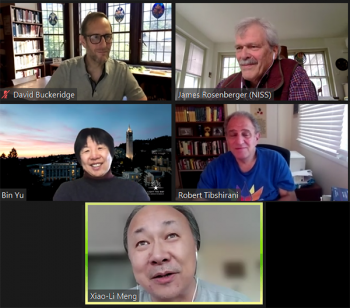 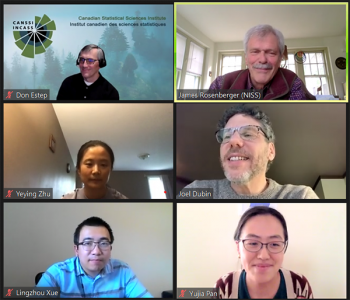 The First CANSSI-NISS Health Data Science Workshop was held not in Waterloo, Ontario as was originally planned but virtually hosted by NISS on Zoom May 7 through 8, 2021.  Nearly 200 statisticians and health data scientists from the U.S. and Canada logged into a variety of thought-provoking and cutting-edge sessions on topics relating to exploring current approaches and new challenges being worked on for integrating Big Data in Health Data Science.

Xioa-Li Meng (Harvard University) started the day on Friday presenting a fascinating plenary entitled “Personalized Treatments: Sounds Heavenly, But Where on Earth Did They Find My Guinea Pigs?” His talk focused on revealing the implications behind the use of machine learning algorithms to ‘personalize’ medicinal treatments.  In his own words,

“Anytime you talk about personalization, there has to be a leap of faith.”
Xiao-Li Meng (Harvard University)

He was followed by short presentations of posters by eight finalists of the Poster Competition for Students and New Researchers.

Perhaps some of the lighter moments of the workshop were evident in the Networking Happy Hour that took place at the end of the day on Friday.  The last place you might think of having fun these days is in a Zoom meeting, but host Jim Rosenberger got the conversation going right away and nearly thirty individuals got a chance to chat together in small break-out rooms, make introductions and trade stories.

Saturday started right up again with a very interesting plenary address given by Mary Thompson (University of Waterloo).  The topic she addressed was "The interface of health data science and survey methods."  This was followed by three invited sessions.  The first was titled the “Late-Breaking Session: AI and Health Data Science” and comprehensive talks were given by three distinguished statisticians, Bin Yu (University of California, Berkeley), David Buckeridge (McGill University) and Rob Tibshirani (Stanford University).  In fact, the conversation inspired plenary speaker Xiao-Li Meng to be placed back in the panel to ask a number of pointed questions that helped to clarify and elaborate upon the points that were made during the session.

The second invited session addressed “Statistical Problems in Imaging and Genetics” and talks by Brian Caffo (Johns Hopkins Bloomberg School of Public Health), Radu Craiu (University of Toronto), Linglong Kong (University of Alberta) and Marina Vannucci (Rice University).  This was followed by a fourth and final session on “Methods for Electronic Health Records (EHR) Data” highlighted by talks given by Rebecca Hubbard (University of Pennsylvania), Marc Suchard (UCLA), Eleanor Pullenayegum (Hospital for Sick Children, and the University of Toronto Dalla Lana School of Public Health) and Sherri Rose (Stanford University).  Questions followed each session.  After this last session the auditing of the algorithms used in AI and machine learning was discussed during the questions period.

The successful three-day conference came to a close with comments from Don Estep, Director of CANSSI and Jim Rosenberger, Director of NISS and the other members of the organizing committee of the workshop, Joel Dubin (University of Waterloo), Lingzhou Xue (Penn State University) and Yeying Zhu (University of Waterloo).  They also announced Yujia Pan a graduate student from the University of Michigan as the winner of the Poster Competition for Students and New Researchers. This event was titled the “First CANSSI-NISS Health Data Science Workshop”.  It was clear that the organizers and attendees all hope that collaboration between CANSSI and NISS continues into the future!

Don't forget to check out the Photo Albums for this events! Screenshots from the sessions are available below:

Recordings of these sessions are made available to those that registered for the conference.  Missed the workshop? No worries! Post-Session Access to recordings of short courses and workshop sessions can be obtained when an event is over.  Select a Registration option on the Past Event page and NISS will make these recordings available to you.