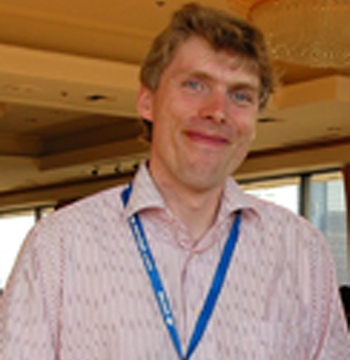 Where were you born/where did you grow up?
I grew up in  Höxter, Germany, a small town near the northern part of West Germany. The easiest way to find it is to look at a map of Autobahns, and pick the spot that is farthest away from any of them.

Where did you go to school (high school, undergrad and graduate school)?
My high school was in Höxter, Germany.  My undergrad was in Ulm, in southern Germany.  This was very far away for the local Bavarians and Swabians in Ulm. They called me  the guy from south-Sweden.
I then moved to Queen's university in  Kingston, Ontario for  8 months.  On arrival I realized to my delight I was admitted into a master's program, and later enrolled in a Ph.D. program at the University of Waterloo, Ontario.   So I never went back to the University of Ulm to finish my degree. Now, German bureaucracy is  very good at keeping accurate records and in those records I am counted as a University drop-out.

What inspired you to go into statistics?
The Master's program at Queen's was a far better match with my interests than the  theoretical German math courses. At that time, we  used computers in Ulm  only for learning programming, not for analyzing data. As a matter of fact, I never saw a data set during my three years of undergraduate studies in Germany.

Who were some of your mentors?
Alan Karr was an early mentor at NISS. Sally Morton was very influential while I was at the RAND Corporation.

How did you hear about NISS?
My advisor Will Welch had worked with Jerry Sacks before.  I had heard about NISS all throughout graduate studies.

What did you do when you were at NISS?
I was working on computer intrusion detection and was  located at AT&T Labs. Alan and sometimes Jerry would fly out once every month or so and see how things were going.  It was great fun learning from everybody around me and probably the ideal position for me.

What advice would you give someone going into statistics?
Work on problems that you find interesting, and don't worry if it's not a traditional statistics problem.  If your problem has a subject matter component, learn about it. Some of the best fun is to discuss problems with non-statisticians from their point of view.

What are you doing now?
After NISS I spent 12 years at the RAND Corporation and developed an interest in survey methodology.  This was interrupted by a one year leave of absence which I spent at a survey department  at a German institute, DIW, in Berlin, Germany.  Now I am a Professor of Statistics in Waterloo, Ontario.

What area(s) of research are you working on these days?
Open-ended questions are usually ignored in surveys or used for the occasional anecdote.  A special case is the final comment question  "Do you have any other comments?" at the end of many surveys. Nobody really knows what respondents are trying to tell researchers in such questions.  I want to give social scientists the tools to analyze those questions.   So I am exploring this area using variations on text mining.

Where are you living now?
Waterloo, Ontario

What do you like to do in your spare time?
With two young kids the concept of spare time is evolving.  I bike leisurely on the country roads surrounding Waterloo as part of a bike club. I go to French and Spanish meet-up groups in town to chat over coffee - or  in my case tea.  I try to catch a good play whenever I can. We are very fortunate to live close to the Stratford festival,  possibly the most  celebrated repertory theatre festival in Canada..

And, of course, we have to end with “other comments?”
I will be spending a one year sabbatical in Auckland, New Zealand starting in September 2015.