Grant Proposals: A Webinar Full of Advice, Suggestions and Tips! 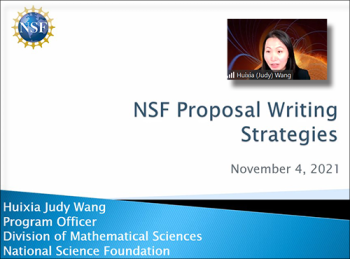 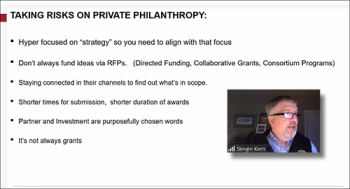 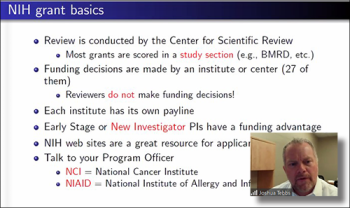 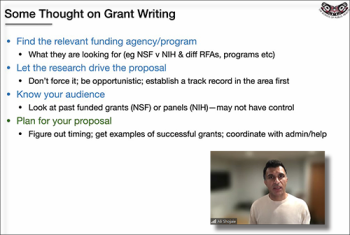 Securing grants has become an integral part of research and in some cases career advancement.  So, how does one prepare a successful grant proposal? This was the topic of an online webinar organized and presented by the NISS Academic Affiliates Committee bringing together four accomplished senior statisticians who have extensive experience in both writing and reviewing grant proposals.

The speakers included Huixia (Judy) Wang who is the National Science Foundation DMS Statistics Program Director and at George Washington University, Steven Kern from the Gates Foundation, Joshua M. Tebbs Professor and Department Chair at the University of South Carolina, who has served at the BMRD study section of National Institutes for Health (NIH) and received several external grants, and Ali Shojaie from the University of Washington who has been successful in securing multiple sole-PI and collaborative grants, and has served on a number of proposal review panels for NSF and NIH.

Judy Wang began the session and her remarks focused more specifically on NSF grant proposal within which she works.  After providing a quick overview of her section of NSF and a number of support resources for grant writers, she began a thorough walk-through of the review process that the NSF engages in including the criteria they are expecting to be addressed.  From here she dove right into a very helpful list of specific tips for preparing proposals including making clear distinctions between prior work and the preposed research as well as addressing the novelty of the project, as well as a host of other suggestions everyone should consider.

“Seek advice from past awardees, your mentors or colleagues and friends. You may even ask someone not in your field to proofread your proposal, just to see whether the flow is coherent and whether the writing is clear to demonstrate the significant importance of the problem, the novelty of the proposed method.”
Judy Wang (NSF)

Steve Kern followed with introduction of the Gates Foundation, focusing on what the foundation does, how they go about doing this and the types of investments the foundation makes.  Steve outlined how the foundation is primarily focused in the US on educational programs and concentrates on global projects that serve to reduce inequity and focus on those with the greatest need. Their funding can involve grants, direct charitable expenses (contracts) and program-related investments.  He then proceeded to review a number of examples in which the foundation was involved.  He finished up with a number of key points that researchers will want to consider if they are seeking grants from private funding sources.

“I will talk specifically about the Gates Foundation but a lot of the comments I’ll make are general to many private foundations for whom you might seek funding from. So, while I’ll specifically talk to issues that are pertinent to our organization, you can generalize a number of these and I will try to point these out.”
Steve Kern (Gates Foundation)

Joshua M. Tebbs (University of South Carolina) provided insights on writing grant proposals based on his experience working as part of the NIH. He provided a thorough review of the basics of NIH grants, the specific review criteria that are important to address properly, and understanding how proposals are scored, which then leads to an understanding of the work of reviewers and panels as they work to reach decisions. He completed his remarks with an extensive list of specific advice and suggestions that anyone thinking about submitting a grant would want to review.

“Details are the mark of the master.  This is a general expression that I use a lot, but in grant writing It matters because writing a grant takes a lot of work. There are many different hurdles.  Make big checklists and check them off.”
Joshua M. Tebbs (University of South Carolina)

The final speaker of the session, Ali Shojaie (University of Washington), was more general in his remarks, however, the experience behind his comments provided attendees with genuine insights into understanding grant writing proposals in general and how this maps on to the researcher’s goals as a scientist.  While advice such as “finding the relevant funding agency” and “letting your research drive the proposal” seem straightforward, the profundity of these statements, based on Ali’s personal experiences and reflection came alive in terms of how important it is to have this groundwork in place. He followed these initial comments with many more suggestions, tips and advice.

“No matter how hard you try, there's going to be some unknowns and some stochasticity involved.  I've been successful a couple of times over the past couple years, but I was unsuccessful many, many times before that.”
Ali Shojaie (University of Washington)

Sumanta Basu (Cornell) moderated the question and answer session, both live and through the Q&A tool that followed.  A number of interesting questions from attendees included: “What kind of information is not available to the reviewers?”, “Are preliminary results typically required for successful proposals?”, “How do you decide to push forward on reviewers comments or drop the idea and work on something else?” and “Is US citizenship or permanent residency needed for the funds in the Gates Foundation?”

Below, please find a recording of this valuable session and links to the slides that were used by the speakers.

"All Lives Have Equal Value"

"NISS Affiliate Webinar:  How to Write a Successful Grant Proposal"

"Some Thoughts on Grants"