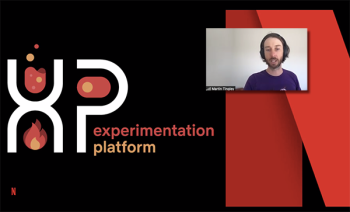 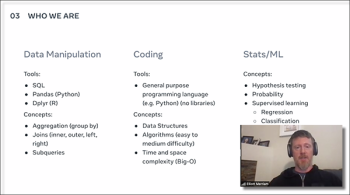 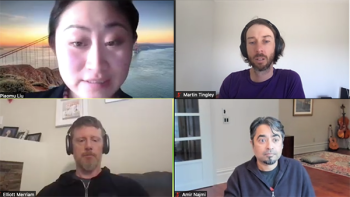 NISS continues to reach out to its Affiliates and other contacts to provide insightful and valued sessions aimed at supporting individuals ready to take big steps along their career paths. Some of these career development sessions have focused on academic positions, others on positions in government agencies and various industries.  This session provided an in-depth and personalized look into the opportunities for statisticians/data scientists from three hi-tech companies. Senior statisticians from Facebook, Netflix, and Google described the types of the research that statisticians in these companies get involved in and career opportunities that are available to consider!  (see Event page)

Over 350 attendees heard from the speakers of this session.  The speakers were Amir Najmi, a Principal Data Scientist at Google, Martin Tingley, head of the Experimentation Platform Analysis Team at Netflix, and Elliott Merriam, a Research Data Scientist at Facebook (Meta).  The session was moderated by Piaomu Liu (Bentley University).

Amir Najmi took a very practical approach to his presentation.  His remarks focused on what you have to do in order to get a job as a statistician or data scientist at Google and what it means to be a data scientist at Google.  He began with a short evolution of how this position has evolved through the years.  This led to a description of the kinds of questions data scientists are confronted with at Google and how this is different from a traditional statistical consultant role that graduate students may be familiar with. From here Amir walked through the various roles that data scientists at Google embrace and the qualifications, skills and experiences that would necessarily support a candidate’s ability to show capacity in these areas.  From here Amir shared the process for preparing for and applying for a position at Google.

“Think of communication as a two-way skill.  It is not simply you saying stuff.  It is also you listening to see if they understood!”
Amir Najmi (Google)

Martin Tingley (Netflix) followed and took a different more personal approach to his presentation.  His talk evolved from the question that Martin said he gets asked all the time:  “How did you end up at Netflix and what did you learn along the way?”  He proceeded to walk through his career journey, beginning with his Ph.D. work in Earth & Planetary Sciences at Harvard University, where he also earned an MA in statistics. Then followed three different Postdoc positions, a joint position in Meteorology and Statistics at Penn State, a stint pricing catastrophe risk for Insurance Australia Group -- and finally Netflix. Martin described the work his team at Netflix does to enable product innovation and business decision making using data and experiments: “It is fair to say that absolutely everything you see on the Netflix product was the winner in a randomized control trial that R.A. Fisher himself would have recognized.”

“When I look back, it has taken me an awfully long time to get where I am. What I want to stress is that the stops I've made along the way have been enormously beneficial.  I am better at my current job for all the different skills, both technical and non-technical skills, that I've acquired along my meandering career path."
Martin Tingley (Netflix)

Elliott Merriam, a research data scientist at Facebook (recently renamed Meta), began his talk by highlighting the five major areas of research his company is involved in, the general approaches used and a detailed list of related technical skills related to each of these key areas: scalability, efficiency, reliability, measurability and privacy.  Having reviewed these Elliot described Meta interest in a candidate’s preparation in terms of sufficient depth in each of the areas, data manipulation, coding as well as statistics and machine learning foundations. He also described how his company uses data insights and findings to influence the broader support positions are make decisions accordingly.

“I think one thing that is underappreciated is the importance of soft skills.  It is really, really difficult to be successful in industry, in my experience, no matter how technically competent you are if you are not able to communicate and partner with people effectively.  This puts a really, really low ceiling on how far you can get.”
Elliot Merriam (Facebook/Meta)

Moderator Piaomu Liu (Bentley) was busy both after the speakers as well as during the Q&A part of the session forwarding questions to the panelists to address, such as, “How does your company value previous different types of experience?”, “When you hire a statistician, how important is the research area they are involved in?”, “How do you evaluate soft skills?” and “What are your expectations for candidates in terms of a MS or a Ph.D.? Is a Ph.D. required to be a data scientist in your company?”  Lots of good questions! And even better answers.
If you are, or soon to be on the job market, this is a session you will definitely want to review.  Below, you can find a recording of the session as well as the slides used by each of the panelists.

Keep an eye open for the next virtual career fair! NISS career fairs highlight opportunities for statisticians working in all types of different sectors in academia, industry and throughout government.  These online sessions are free!  Plus, you get to hear from experienced professionals who can give you an inside look into an area you may be interested in!   Be sure to register early!