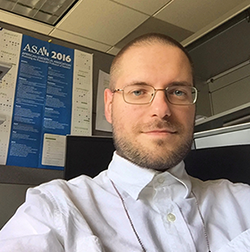 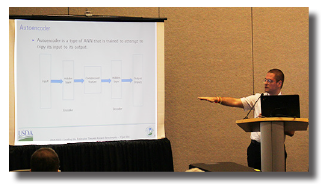 Luca Sartore grew up in a small town in the northeastern countryside of Italy that has spectacular views of the Alps.  He earned his undergraduate degree in three separate areas by majoring in statistics, computer science and management at the Ca’ Foscari University of Venice.  He then earned his Master degree in statistics for business from the same University.  From here, he received his Ph.D. in statistical sciences from University of Padua, where he focused on quantile regression and spatio-temporal models.  Prior to NISS, he was a research fellow for the European Centre for Living Technology, where acquired new techniques that he is still using today.  Recently, Sartore has been working in Washington, DC with National Agricultural Statistics Service (NASS) for the past three and a half years as a Research Associate with NISS.  Different views but still his mind focuses on statistics.

Why statistics? Why data?

“There are a couple of reasons.”, explains Sartore, “First, I have always liked to deal with numbers.  I like to find that story that might not be obvious from the data, and developing methods that help to draw better conclusions from the analysis.  Later in my studies, I found it exciting to see the potential in those methods that make more precise predictions.  Second, my mother was an accountant, my uncle was a statistician, a cousin is a programmer, and there are other family members involved in mathematics. They guided me towards quantitative studies, so I guess it is something that is in our family.”

Sartore’s connection with NISS is something that he helped to bring about himself.  After giving a presentation on a collection of R functions that he developed for land-use predictions, a number of folks from NASS came up to him afterwards with questions and a profound interest in his work.  One thing led to another and Sartore found himself immersed in a number of projects at NASS as a NISS research associate.  One of his early projects at NASS reached its completion with an enhanced methodology to compute unbiased estimates for the US Census of Agriculture. Since then, he has been involved also in other projects that uses satellite data to predict crop yields, and survey data to provide forecasts of hog production for various time frames and regional levels (county, state and national).

Sartore shared that there are a number of challenges in working with a government institution.  First of all, while there might be recent versions or packages of software available via the web, federal institutions are prohibited from working with these programs for security reasons.  As a result, much of the software with these new methods or approaches needs to be built in-house.  While on the one hand, this is something that takes time, “it also allows one to work through and test the computation of these approaches, and include our own.”  Secondly, having access to the latest data is forbidden by law.  Thus, the challenge is to use the available data to develop models, or suggest methods, that has to be accurate even when the latest data were to be incorporated by federal employees.

“My experience with NISS has provided me with way more opportunities than I expected.  There is so much more that can be accomplished both by me personally as well as the potential for finding solutions for the projects that I am involved in."

One thing that Sartore misses from his time in time growing up in Italy is the chance the chance practice playing the organ as he did in Italy.  A place to practice is not an easy thing to find but he has had a chance to visit a number of churches and meet a number of wonderful people.