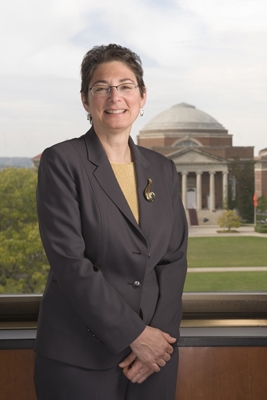 As part of the 25th anniversary celebration at the NISS-SAMSI reception, the National Institute of Statistical Sciences (NISS) initiated a new award to recognize the extraordinary achievements of some of its former postdocs. NISS started mentoring postdoctoral fellows and associates in 1993. Since that time, more than 70 people have been postdocs at NISS. NISS announced that Jiming Jiang, Professor of Statistics at the University of California - Davis, and Laura J. Steinberg, Professor, College of Engineering and Computer Science at Syracuse University received this award, which was presented at the NISS-SAMSI reception at the 2015 Joint Statistical Meetings in Seattle, Washington on August 10.

Jiang received the NISS Postdoctoral Achievement award for "Honoring his distinguished career and excellence in leadership through research, through education and through example as a role model for the profession of statistics," said Nell Sedransk, Acting Director of NISS, during her presentation of the award.

Jiang graduated with a Ph.D. in Statistics from the University of California Berkeley in 1995, after earlier receiving bachelors and masters degrees in Mathematics and Probability and Statistics respectively, from Peking University.  After graduating from Berkeley, Jiang spent a summer as a Postdoctoral Associate at NISS. He later held academic positions at Case Western University and the University of Nebraska before being appointed as an Associate Professor in 2001 and Director of the Statistical Laboratory at UC Davis from 2004-2007. He was promoted to Professor in 2004.

Jiang has published more than 80 peer reviewed papers, and three books. He is particularly well known for his work on generalized linear mixed models, which was the subject matter of his first book. Other interests include small area estimation with applications to survey data, asymptotics and large sample statistics, and model selection.

Steinberg received the award "Honoring her distinguished career and impact through her leadership in realizing a vision for the intersection of environmental science and statistics," said Nell Sedransk, Acting Director of NISS during her presentation of the award.

Steinberg credits her experience at NISS with broadening her ability to apply statistics to interdisciplinary problems. “Much of my growth as a researcher and collaborator came from the intense research environment at NISS,” Steinberg says. “I had a set of incredibly talented post-doc peers to work with, and the privilege of being personally mentored by Director Jerry Saks and Associate Director Alan Karr.”

Steinberg is Professor and Special Assistant to the Chancellor at Syracuse University, where she had previously been serving as Dean of the College of Engineering and Computer Science. In her new, university-wide assignment, she will conduct a comprehensive assessment of the University's Campus, Planning, Design and Construction operations. Prior to her becoming dean at Syracuse University, she served as professor and chair of Environmental and Civil Engineering at Southern Methodist University. She received her Ph.D. in Environmental Engineering from Duke University and was a NISS postdoctoral fellow from 1993 - 1995. Her areas of expertise include environmental modeling and policy, diffusion of innovation, and critical infrastructure protection.