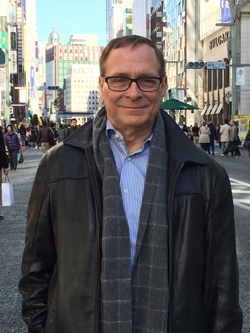 Ray Bain joined the NISS Board of Trustees in July of this year and will be serving a three-year term. NISS staff member Jamie Nunnelly sat down with Ray recently to get to know him better.

Ray grew up in the suburbs of Chicago, better known as the Windy City. He moved to Philadelphia when he was 10, because his father was transferred there. Ray went to high school in Philadelphia, then got his undergraduate degree at Franklin and Marshall, a small, private college in Lancaster, Pennsylvania where he majored in experimental psychology.  Majoring in experimental psychology meant that he took neurology, research design and statistical analysis classes, which he particularly enjoyed. His advisor, Dr. Stuart, at Franklin and Marshall told him that he might want to consider getting an advanced degree in a fairly new field called biostatistics. At that time (1975), there were about 5-6 universities offering advanced degrees in biostatistics, so he applied to several of them and decided to go to Emory University, because they gave him a full scholarship and a stipend. Ray admitted that the warmer climate was appealing as well.

At first Ray thought he would just get a master's degree in statistics, but his advisors told him he could go one of two routes: he could write his master's thesis or he could continue on for a Ph.D. He decided to stay on and get his Ph.D.  After receiving his Ph.D. he was offered a position as a faculty member in the Department of Statistics and Biometry at Emory .  Mike Kutner was his mentor at Emory.

While at Emory, he met Marlene, who would eventually become his wife. They married in 1985. Marlene was from Toronto and was on the Emory faculty as  a lab animal veterinarian. Marlene had a turn of the century Victorian bungalow in Atlanta that she wanted to renovate and Ray helped her out. Pretty soon, renovating old homes became a hobby they both shared.

After they married, Marlene got a dream job at the National Institutes for Health (NIH) as the first lab animal veterinarian of the National Eye Institute, and later joined the U.S. Public Health Service. Ray knew that Washington DC was a great place for statisticians and biostatisticians, so he was happy to relocate to Washington DC as well. He landed a great job at George Washington University (GWU) Biostatistics Center.   He worked there from 1986 - 1999. John Lachin, Sc.D. mentored Ray when he was working at GWU.  "That's really where I learned how to design, conduct and analyze clinical trials," said Ray.

Of course, to continue their hobby of renovating houses, they bought a 1920's Dutch Colonial house and renovated it while they were living in Chevy Chase, Maryland. "They really knew how to build houses back then," Ray commented.

Ray thought he would always stay in academics, but in 1999, he made a major change in his career. Ray had a colleague, George Williams, who had been the Chair of the Biostatistics and Epidemiology Department at the Cleveland Clinic, and was working for Merck. He called Ray and told him to come up to Philadelphia for a visit. Ray figured it wouldn't hurt and he could also see his parents while he was in Philly. After about the second or third trip, Williams offered a job to Ray. The biggest challenge was that Marlene needed to stay with the U.S. Public Health Service until 2007, so for eight years they had a long distance relationship. Ray traveled back to Washington DC on the weekends to be with his wife.

"I arrived on April Fool's Day in 1999. And after a year, GWU called me up and asked me if I had had enough, so I talked to George about it and he convinced me to stay at Merck. Then, six months later, he decides to leave! And, even more shocking, he told me that he was going to make me the acting head of the department!" Ray recalled. He put his name in the hat to become the permanent head of the department, and got the job.

Instead of renovating another house, Ray and his wife decided to build a house very near Merck's Philadelphia location. Ray knew he was way too busy at work to be able to have the energy to work on a house every other waking hour of the day. They hired a builder who was willing to put in a lot of features that are traditionally seen in older homes. They love the house and the location, which is very near Merck.

Ray is part of the Clinical Trials Transformation Initiative, which is a public-private partnership that is analyzing existing research impediments and recommending solutions that will lead to a more sustainable and effective clinical trial system. "The clinical trial complexity has really gotten out of control," Ray said, "We are trying to optimize the process as much as possible so that you are not doing a lot of complex stuff. The cost of clinical trials has gone through the roof, so we do a lot more adaptive designs mainly because it helps with keeping costs in check."

When Ray is not working or renovating a house, he loves to golf. He used to be on the golf team in high school and has played on and off ever since.