NISS and ITSEW Go Way Back! 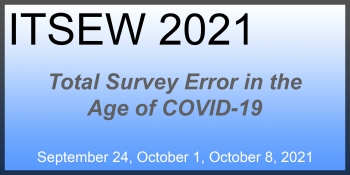 The first total survey error workshop was held in 2005, at the Bureau of Labor Statistics in Washington, DC. It was organized and sponsored by NISS under the auspices of the NISS Affiliates Program. The organizers were Paul Biemer (then and still at RTI International), Jerry Reiter (then and still at Duke) and Alan Karr (then director of NISS). Paul Biemer and Alan Karr have been on the organizing committee for every ITSEW since 2005! The model for the workshop was to hold a series of survey nonresponse workshops that were initially organized by Robert Groves and others.

It is believed that the International Total Survey Error Workshop name and ITSEW acronym came into existence with the second workshop, which was in Research Triangle Park, North Carolina in 2008.  In addition, since 2005, NISS houses the ITSEW archives from these various workshops on its web site.