NISS Notes the Passing of a Beloved Colleague 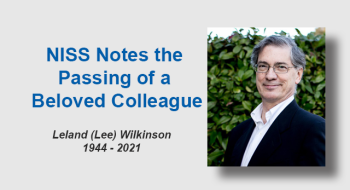 With much sadness, NISS notes the passing of a good friend and colleague, Leland (Lee) Wilkinson (November 5, 1944 – December 10, 2021).  Lee was a current Member of the NISS Board of Trustees since 2016 and a long-term friend and supporter of NISS.  He has taken part in many NISS hosted events over the years most recently the NISS Writing Workshop for Junior Researchers, the webinar “What’s in a name – data analytics, machine learning, artificial intelligence and what else?” and taught the NISS Essential Data Science for Business tutorial, “Descriptive Analytics, Exploratory Data Analysis, and Data Visualization.”

In 2010 he was the recipient of the NISS Distinguished Service Award.  His citation epitomizes his positive impact on NISS, then and hence:

“In recognition of too many forms of service to NISS to list. The most notable things, of course, are his four years as Vice-Chair of the Board of Trustees, seven+ years as chair of the Affiliates Committee, and at least six years on the Executive Committee. Equally important, he has been a major force in several affiliates’ workshops and formation of the affiliates’ clusters. Speaking personally again, his wise counsel and support have helped me have the confidence to move NISS forward.”

Lee was Chief Scientist at H2O, and Adjunct Professor of Computer Science at the University of Illinois at Chicago. He wrote the SYSTAT statistical package and founded SYSTAT Inc. in 1984.  His awards included Fellow of the American Statistical Association, a Fellow of the American Association for the Advancement of Science, and an elected member of the International Statistical Institute. He is also the author of The Grammar of Graphics, the foundation for a number of commercial and open-source visual analytic systems.

NISS mourns the loss of a wonderful colleague and friend and extend our sincere condolences to his wife, Marilyn Vogel, and his daughters Amie Wilkinson and Caroline Wilkinson.