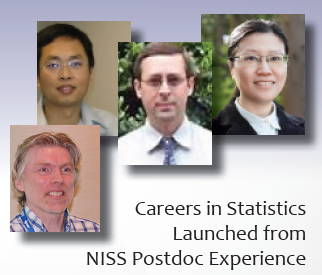 A postdoctoral appointment gives you the opportunity to build a solid foundation and it also gives you a chance to explore, listen and learn. All of this involves hard work but the experience is worth it say former NISS postdocs.  Here are the comments from a few whose career started out at at NISS.

“The postdoc gave me a different perspective of what type of problems to tackle and how to tackle them. In that sense it had a profound long-term effect on my career.”

Matthias is now Professor in the Department of Statistics and Actuarial Science at the University of Waterloo, Ontario, Canada. Prior to his current appointment he spent 14 years outside of academia at the RAND Corporation, the National Institute of Statistical Sciences, AT&T Labs and the German Institute for Economic Research, DIW. He has served as director of the Survey Research Centre at the University of Waterloo and as head of consulting at the RAND corporation. He was on the board of the European Survey Research association. His interests include applied survey research at the interface to statistical learning. His 70+ peer-reviewed papers have been cited more than 13,000 times.

A postdoc position also gives you a chance to sharpen a range of skills that you might not have had a chance to experience in an academic program, skills that are critical in real-world work research environments. For instance, leadership, management, teambuilding and communication are all areas that researchers must be able demonstrate proficiency.

“I had the chance to work on real projects from industry and developed further methodologies based on the applied research. This experience had  big impact on my later research. I also communicated with many excellent scholars from the universities who gathered at NISS or SAMSI workshops, conferences, and other events. This was very rewarding as it expanded my views about statistics and beyond. I’m proud of being a postdoc at NISS!”

Jasmine is now Professor of Statistics at East China Normal University, Shanghai, China.  Since her time as a NISS postdoc she has authored many peer-reviewed research papers, has been involved in a wide variety of grants and has received awards for her teaching.

Experience in any of these areas is a huge asset for new researchers.  Examples from NISS Postdoc positions include developing leadership in helping to define the direction or the management of a project, working as an equal partner in a research team to help to determine and evaluate outcomes.

“I really enjoyed being part of an interdisciplinary team… Team-based research makes the statistician an equal player at the table and recognizes the intellectual contributions above and beyond his/her statistical expertise.”

George is now Professor of Biostatistics, Bioinformatics and Biomathematics at Georgetown University. He is author of 118 peer-reviewed articles, has served as guest editor or co-editor of several prestigious journals and been in involved in 37 grants and contracts, PI on 3 projects and co-Investigator on 34 projects.

Perhaps most important is the ability to communicate on a variety of levels. Initially, being able to articulate a vision for research ideas all the way through sharing results in a meaningful way that convinces others of the importance of your work.

“I had a great time at NISS. My work with Dr. Nell Sedransk was on a project in cancer proteomics and through this we were able to publish couple of interesting papers in highly respected journals. I often recall those valued moments at NISS.  They were colorful and invaluable.”

Xingdong is now Full Professor of the School of Statistics and Management, Shanghai University of Finance and Economics, China.  Since his time as a NISS postdoc he has taught a wide range of courses in statistics and data analysis. He has also been involved in authoring many research papers that focus on quantile and ridge regression.

It makes sense that young researchers seek to involve themselves in as many opportunities as possible to practice these skills.  Throughout the years NISS has mentored many young researchers.  Many of these have gone on to develop significant careers as research statisticians in academia, industry and government.