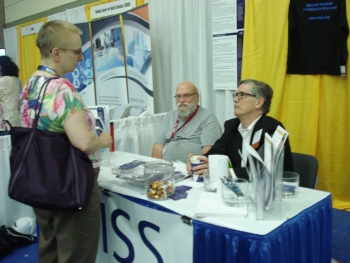 Dr. Phillip Kott, a Senior Research Statistician at the Research Triangle Institute International's Center of Excellence for Complex Data Analysis, received the 2017 NISS Distinguished Service Award. Kott has been serving on the NISS Board of Trustees since 2011. The award recognizes Kott's extraordinary service that advances NISS and its mission.

Every year, one or more recipients are chosen by a committee composed of the Vice-Chair of the Board, the chair of the Awards Committee of the Board and the Director. The award was presented by Nell Sedransk, NISS Director-DC, at the 2017 NISS JSM Affiliate Luncheon Workshop. “It is a real pleasure to present Phil Kott with the NISS Distinguished Service Award.  Phil has taken on a variety of roles and made valuable contributions to NISS, as Affiliate Liaison, as Trustee, and as a Member of the Board of Trustees Executive Committee,” says Sedransk.

Kott is a member of the NISS Affiliate Committee and he actively participates in the work of the committee and its meetings. Kott suggested three workshops that NISS presently offers. The first workshop is on the analysis of data from complex survey samples; the second workshop is on handling nonignorable nonresponse; and the third workshop is on inference from nonprobability samples which is a partnership workshop with the Washington Statistical Society (WSS). The NISS/WSS Workshop on Inference from Nonprobability Samples will be held on September 25, 2017, at the Bureau Labor Statistics Conference Center.

Receiving the award Kott humbly said, "It was indeed an honor to receive the award and completely unexpected since all I did was suggest ideas for workshops I wanted to participate in.”

Sedransk says, “Phil has spearheaded the development and continuing success of the NISS series of Fall Conferences on Contemporary Issues in Survey Sampling.  These have attracted participants from all sectors, government, industry and academia; and have continued to expand as they address technical advances and practical implementations for large-scale surveys and smaller, specialized data collections.”

Kott is an expert in survey sampling theory and practice, including calibration weighting, multiphase sampling, the analysis of survey data, and variance estimation. As a fellow of the American Statistical Association (ASA),  Kott has served as chair of both the ASA's Survey Research Methods Section and Council of Chapters as well as president of the Washington Statistical Society.

Kott received a Presidential Rank Award in 2007 and an ASA Section on Statistics and the Environment Distinguished Achievement Medal in 1997.