Profile on NISS Board of Trustees Member Dr. Gabriel Huerta 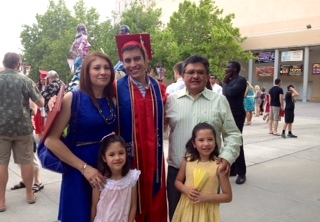 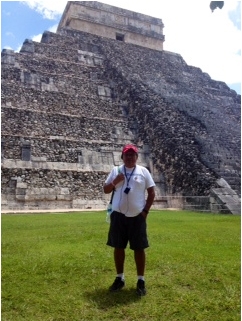 Gabriel Huerta, Professor and Graduate Chair for the Department of Mathematics and Statistics at the University of New Mexico, recently joined the NISS Board of Trustees.  Gabriel sat down with us to tell us about his background.

Gabriel was born and raised in the thriving metropolis of Mexico City, one of the most populated cities in the world. He attended Universidad Nacional Autónoma de México and studied actuarial science there. But, while he was taking his courses, he was not sure he really wanted work for an insurance company. He loved mathematics, but thought the job opportunities in that field may be more limited. Towards the end of his undergraduate degree, he started taking some statistics, probability and regression courses and that's when it became clear that statistics was the area of research he wanted to pursue. He continued at National University for his graduate work in statistics. One of his mentors was Manuel Mendoza , who introduced him to Bayesian methodology. (see this related story about Bayesian Statistics in Mexico and a mention of Gabriel Huerta.)

When he was 28, Gabriel moved to the United States and attended Duke University to get his Ph.D. in Statistics. "The program at Duke was quite flexible and I didn't have to do everything from stage zero. That was important to me because I had already previously done graduate work at the National University," remarked Gabriel.

His advisor, who was another mentor, was Mike West. Gabriel's thesis was "Bayesian Analysis of Latent Structure in Time Series Models."  for which he received the 2001 Aranda-Ordaz Award for best Ph.D thesis in any area of Probability and Statistics written by a Latin American  in the last 3 years.  This award was sponsored by the Bernoulli Society through its Latin American Regional Committee. He graduated in 1998.

After receiving his Ph.D., Gabriel held a postdoctoral position for one year at Northwestern University and Martin Tanner and Wenxin Jiang both became mentors there.   Gabriel collaborated with Martin and Wenxin on “hierarchical mixtures for time series models”.

"As I was finishing graduate school at Duke, I started collaborating with Bruno Sanso (University of California, Santa Cruz) and Jonathan Stroud (George Washington University). We started a project about developing spatial-temporal models for hourly measurements of ozone in Mexico City using data from the monitoring network there. Because I grew up in Mexico City, I was very interested in this study. That's how I got into environmental statistics," said Gabriel.

He started at the University of New Mexico in 2002 as an Assistant Professor and worked his way up to full professorship.  Gabriel has supervised two postdocs and 4 Ph.D. students while at UNM. He also spent a year at the Department of Statistics at Indiana University from 2011-2012.   He was also a Researcher/Faculty at CIMAT, Mexico from 1999-2002.

Gabriel was at SAMSI during the 2009-2010 program on Space-Time Analysis for Environmental Mapping, Epidemiology and Climate Change during the Fall semester.  He also served on the SAMSI diversity committee and is currently the Secretary of the EnviBayes section of the International Society for Bayesian Analysis (ISBA).

Gabriel got married to his wife, Geraldine, 14 years ago in Guanajuato, Mexico. They have a son, Al, who is 23 and completed his business/marketing degree from the University of New Mexico recently, and is working as a manager for Hollister, a clothing design company. They also have twin daughters, Miranda and Denise, who are 8-years-old, born in Albuquerque and are “true burque~as” ,as they say in New Mexico. Gabriel (along with Al and Geraldine), became a US citizen in 2013.

Gabriel is working with climate scientist Charles Jackson (University of Texas - Austin) on some research funded by the U.S. Department of Energy (DOE).  He explained, "Charles is very interested in quantifying different sources of uncertainty that pertain to issues about climate change, so this involves data from climate models, observations and lots of computational tools."

Some of the challenges that Gabriel sees with working in the climate change area is to understand the critical science questions which are not always easily transported into the statistical context. He also thinks handling the large amount of data is a challenge, because most of the standard tools are not appropriate for handing the vast amount of data that needs to be interpreted. There is a lot of high dimensionality issues that arises from this problem. Gabriel also noted that the statistical language used in climate data is different the more common language used by statisticians.  "Translating terms from one area to the other has taken a lot of time," he commented.

Gabriel's advice to someone who may be thinking of a career in statistics is to get as much computational training as possible in addition to mathematical training and thinking.  He thinks it is very important to learn how to handle big data sets. "This is a really exciting field to be in right now. There are lots of opportunities in industry and academia for statisticians," he said.

To relax, Gabriel likes to watch football, (both what we call soccer here in the States, and professional football). He's a Colts fan. He said he has been a Colts fan for a long time, but the interest became more pronounced after he and his wife lived in Indiana.  He also takes a peek to the Mexican soccer and the UEFA champions league. He also enjoys all kinds of cuisine but in particular he is big fan of green or red chili.