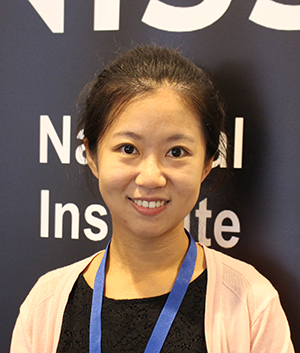 Lu Chen (NISS Research Associate)  joined NISS and the Research and Development Division of the National Agricultural Statistics Services (NASS) in 2019 and has been working on a number of projects, primarily focused on the United States Census of Agriculture.  This census is conducted every five years and provides a complete enumeration of the farms and ranches in United States.

At the close of the harvesting season, the County Estimates program at NASS (National Agricultural Statistics Service) provides the USDA’s agricultural estimates at the county level for key crops by planted acreage, harvested acreage, yield and production. Survey data are the major source of information to produce estimates; however these estimates may not be fully consistent with administrative data from other sources. Thus, NASS developed and has now adopted a Bayesian model to improve the accuracy of estimates and to address possible inconsistencies in the survey data. NASS practices and its publication standard for the estimates require rounding for the final estimates. In consequence, rounding at the county level leads to tabulation inconsistency at the state level for state totals and estimated ratios (such as yield). Independentbasic administrative constraints also still need to hold.
New algorithms have been designed at NASS that take administrative constraints into account in the rounding process. Comparative studies of the performance of the candidate algorithms are next in order to identify the most timely and accurate rounding method. Thus far, a software library has been developed and documented for rounding at one level and benchmarking state-level totals. It has now been expanded beyond rounding planted and harvested acreages by benchmarking NASS estimated state-level totals and concurrently enforcing administrative constraints provided by the FSA (Farm Service Agency) and RMA (Risk Management Agency) to round yield and production and to stabilize ratio relationships with harvested acreage.

Core research and modeling efforts for producing summary agriculture statistics, especially small area estimates, continue to expand the suite of Bayesian methods to meet specific requirements for each implementation. Recent additions include the development of a lognormal–normal model for acreage and spatial mixture models for cash rental rates. Model performance is systematically evaluated first by simulations and then by application to past NASS data. Algorithms for detection of deviation from the model, identification and characterization of influential sources (e.g., counties or sampled units) are similarly validated with simulation and application to past data.

Estimates of agricultural cash rental rates at different geographic levels (e.g. state or county level) have taken on increased importance over recent years due to their application in rental agreement formulation, farm program administration, and related activities. For the county level estimates, NASS has implemented a model-based approach that uses two years (not necessarily consecutive) of data from its survey to estimate rental rates. The current primary research objective is to use the small-area model-based approach at the state level. However, a second objective is to there is to detect influential records in the survey and automatically reweight them to help clean the county-level survey summaries as the model inputs.