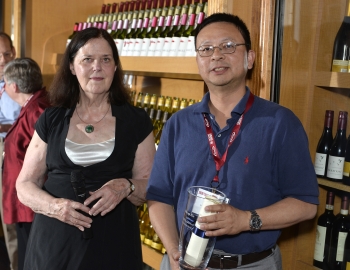 NISS is proud to honor former postdoctoral fellows, Dr. Shanti Gomatam and Dr. Minge Xie, with the 2017 NISS Postdoc Achievement Award. The awards were presented to Gomatam and Xie at the 2017 NISS JSM Reception.

The NISS Awards Committee made the selection decision after a series of discussions led by Christy Chuang-Stein, NISS Board Member, who chaired the awards committee.  She commented that “A longstanding goal of NISS is to help develop statisticians through post-doctoral training. The Postdoc Achievement Award celebrates this mission by recognizing former postdocs who have had distinguished careers.”

Although NISS has been mentoring postdoctoral fellows since 1993, the NISS Former Postdoc Achievement Award was introduced in 2015 as part of the 25th anniversary of NISS.

Dr. Gomatam is a Mathematical Statistician at the U.S. Food and Drug Administration. The award recognizes Gomatam's significant contributions to the review and approval of safe and effective medical products.

Gomatam couldn’t be present at the NISS JSM Reception to receive the award, but in her message, she says, "I was truly honored to have been nominated for, and to have received, the NISS postdoctoral award. My time at NISS was a turning point in my career moving me toward a career in public service with the U.S. Food and Drug Administration (FDA) – it is very satisfying for me to be able to make a useful contribution to public health while being exposed to different scientific and medical areas."

After obtaining a Ph.D. from the Florida State University Statistics Department in 1995, Gomatam did a two-year post-doctoral visit at the University of Florida’s Biostatistics division for a couple of years before accepting an assistant professorship at the University of South Florida in the Mathematics department. Gomatam spent several years at NISS as a Postdoctoral fellow under the mentorship of Alan Karr working primarily on data confidentiality problems for the National Center for Education Statistics (NCES). After her appointment with NISS, Gomatam joined the FDA's Center for Devices and Radiological Health (CDRH) working on several interesting scientific areas using an array of statistical methods.

After spending 10 years with CDRH, Gomatam joined the Safety Division of the FDA’s Center for Drug Evaluation and Research (CDER) in 2014. At CDER she worked on large randomized cardiovascular outcomes trials.

Dr. Xie is a Professor of Statistics at the Rutgers University. The award recognizes Xie's research on the foundations of statistics and his longstanding commitment to his students and profession.

Receiving the award at the NISS JSM Reception, Xie said, “NISS is a unique institute in our profession. NISS has always been truthful to its mission to deliver high-impact research in science and in public policy, and also to train the next generation of young statisticians and scientists who can effectively communicate across disciplines.  I would like to thank NISS for its role played in my career, and I also wish NISS the best of luck in its future.”

Growing up, Xie always wanted to do physics or be an engineer. However, he went on to study math at the University of Science and Technology of China from where he received his bachelor’s degree in mathematics. He came to the U.S. and got his Ph.D. degree in statistics from the University of Illinois at Urbana-Champaign. The project of his Ph.D. thesis was a NISS project. After the NISS postdoc appointment, Xie started his academic career as an Assistant Professor at Rutgers Statistics Department in 1997. He is a distinguished professor of statistics at Rutgers and has also served as the director of Rutgers Office of Statistical Consulting (OSC) for many years.

Speaking about his long association and work with NISS, Xie says, “I learned how to do research and how to think as a statistician. The NISS projects, together with my graduate education, played a key role to transfer me from a math undergraduate to a real statistician.  I also gained many insights of the pharmaceutical industry. The experience has been very valuable in these many years for me serving as the Director of Rutgers OSC and working with people in the pharmaceutical industry in New Jersey.”

Passionately speaking about his time spent with NISS, Xie goes on to say: “I can say that the NISS and my graduate school training had a huge impact on my career.  I remember that in the feedback to my first NSF (National Science Foundation) proposal submitted right after I joined Rutgers, the panel’s summary stated that “the young PI is well-trained and has the unique combination and ability to see through the lenses of both theory and application.” You can imagine what an encouragement that was to a green assistant professor and I still remember it after 19 years.”