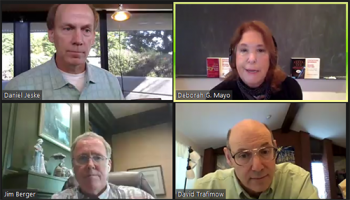 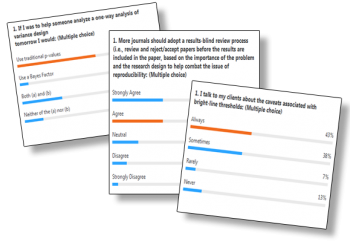 The Statistics Debate event was held in a well-structured debate format. While the participants were given selected questions ahead of time so they had a chance to think about their responses, the group opted not to have a practice, so their reactions to each other were extemporaneous and unscripted.  The moderator, Dan Jeske (University of California, Riverside) used a consistent, rolling format that provided each participant with equal opportunities to be the first to respond to a question as well as respond or follow-up based on the remarks of the other participants. And, believe it or not, all of the participants behaved wonderfully!  They adhered to the pre-set time limits. They showed respect for one another. And the moderator was able to leave with his sanity intact!

"This event was well moderated, and the speakers were respectful and knowledgeable."  (Attendee comment)

The purpose of this event was to shed light on and explain the main features (pro and con) that surround some of the controversies on use of p-values. Here are a few of the examples of the questions that the speakers were asked to respond to:

Given the issues surrounding the misuses and abuse of p-values, do you think they should continue to be used or not? Why or why not?

Should practitioners avoid the use of thresholds (e.g., P-value thresholds) in interpreting data? If so, does this preclude testing?

What are your reasons for or against the use of Bayes Factors?

What are the problems that lead to the reproducibility crisis and what are the most important things we should do to address it?

As you might expect, the three debate participants represented differing perspectives. Jim Berger (Duke University) has been exploring the Bayesian and frequentist foundations of statistics for 50 years, and has recently been heavily involved in bringing these foundational perspectives to the p-value debate. David Trafimow (New Mexico State University) started the serious questioning of any use of p-values via the journal he edits, and Deborah Mayo (Virginia Tech) has developed a reformulation of frequentist error statistical methods within a full-blown philosophy of learning from error.

Please feel free to view the recording of this session below to further your understandings of each of these perspectives to determine for yourself where you might stand on the issues that were discussed.

Dan Jeske (moderator) received MS and PhD degrees from the Department of Statistics at Iowa State University in 1982 and 1985, respectively. He was a distinguished member of technical staff, and a technical manager at AT&T Bell Laboratories between 1985-2003. Concurrent with those positions, he was a visiting part-time lecturer in the Department of Statistics at Rutgers University. Since 2003, he has been a faculty member in the Department of Statistics at the University of California, Riverside (UCR) serving as Chair of the department 2008-2015. He is currently the Vice Provost of Academic Personnel and the Vice Provost of Administrative Resolution at UCR. He is the Editor-in-Chief of The American Statistician, an elected Fellow of the American Statistical Association, an Elected Member of the International Statistical Institute, and is President-elect of the International Society for Statistics in Business and Industry.. He has published over 100 peer-reviewed journal articles and is a co-inventor on 10 U.S. Patents. He served a 3-year term on the Board of Directors of ASA in 2013-2015.

Jim Berger is the Arts and Sciences Professor of Statistics at Duke University. His current research interests include Bayesian model uncertainty and uncertainty quantification for complex computer models. Berger was president of the Institute of Mathematical Statistics from 1995-1996 and of the International Society for Bayesian Analysis during 2004. He was the founding director of the Statistical and Applied Mathematical Sciences Institute, serving from 2002-2010. He was co-editor of the Annals of Statistics from 1998-2000 and was a founding editor of the Journal on Uncertainty Quantification from 2012-2015. Berger received the COPSS `President's Award’ in 1985, was the Fisher Lecturer in 2001, the Wald Lecturer of the IMS in 2007, and received the Wilks Award from the ASA in 2015. He was elected as a foreign member of the Spanish Real Academia de Ciencias in 2002, elected to the USA National Academy of Sciences in 2003, was awarded an honorary Doctor of Science degree from Purdue University in 2004, and became an Honorary Professor at East China Normal University in 2011.

Deborah G. Mayo is professor emerita in the Department of Philosophy at Virginia Tech. Her Error and the Growth of Experimental Knowledge won the 1998 Lakatos Prize in philosophy of science. She is a research associate at the London School of Economics: Centre for the Philosophy of Natural and Social Science (CPNSS). She co-edited (with A. Spanos) Error and Inference (2010, CUP). Her most recent book is Statistical Inference as Severe Testing: How to Get Beyond the Statistics Wars (2018, CUP). She founded the Fund for Experimental Reasoning, Reliability and the Objectivity and Rationality of Science (E.R.R.O.R) which sponsored a 2 week summer seminar in Philosophy of Statistics in 2019 for 15 faculty in philosophy, psychology, statistics, law and computer science (co-directed with A. Spanos). She publishes widely in philosophy of science, statistics, and philosophy of experiment. She blogs at errorstatistics.com and phil-stat-wars.com.

David Trafimow is Professor in the Department of Psychology at the New Mexico State University.  His research area is social psychology.  In particular his research looks at social cognition especially in understanding how self-cognitions are organized, and the interrelations between self-cognitions and presumed determinants of behavior (e.g., attitudes, subjective norms, control beliefs, and behavioral intentions). His research interests include cognitive structures and processes underlying attributions and memory for events and persons. Additionally, he is also involved in methodological, statistical, and philosophical issues pertaining to science.