Nominations are now being accepted for the 2021 Jerome Sacks Award!

Please use the nomination form below. If you have any questions or if you prefer to send your completed entry PDF by email, please send to sacksaward@niss.org.

Nominators can use the link to this form to submit information.
The deadline for submissions is April 30, 2022

The NISS Board of Trustees established the Jerome Sacks Award for Cross-Disciplinary Research in 2000 to honor Sacks' service as the founding director of NISS. The annual prize of $1,000, presented at the NISS JSM Reception, recognizes sustained, high-quality cross-disciplinary research involving the statistical sciences.

Francesca Dominici, the Clarence James Gamble Professor of Biostatistics, Population and Data Science at the Harvard T.H. Chan School of Public Health, and Co-Director of the Data Science Initiative at Harvard University, is the 2020 recipient of the Jerome Sacks Award for Cross-Disciplinary Research. Her citation reads, “For her leadership in high-impact cross-disciplinary research that brings together statistical innovation, heterogeneous data, and diverse scientists to address critical challenges in environmental epidemiology, especially regarding the effects of air pollution on public health.”

Jeremy M. G. Taylor, the Pharmacia Research of Professor Biostatistics, also holding appointments in Biostatistics and Radiation Oncology, Computational Medicine and Bioinformatics at the University of Michigan is the 2019 recipient of the Jerome Sacks Award for Cross-Disciplinary Research.  He is also Director of the Center for Cancer Biostatistics.  His citation reads, "For his leadership in the field of biostatistics and his major methodological contributions in a wide array of statistical problems of importance in medical science, including fundamental contributions to AIDS/HIV and cancer research." 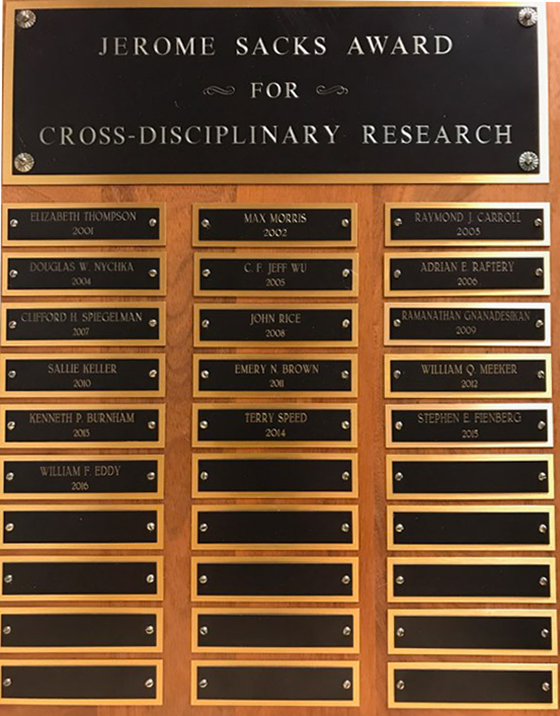 G. Jogesh Babu, Distinguished Professor of Statistics, Astronomy & Astrophysics and Director of the Center for Astrostatistics at Penn State University is the 2018 winner of the Jerome Sacks Award for Cross-Disciplinary Research.  His citation reads, "For his vision and dedication in helping to build the astrostatistics community for more than two decades, his commitment to young researchers in the field, and his research contributions to the analysis of astronomical data."

Jun S. Liu, Professor of Statistics at Harvard University, with a joint appointment in Harvard School of Public Health, is the 2017 winner of the Jerome Sacks Award for Cross-Disciplinary Research. Liu was selected for his "groundbreaking research contributions at the interface of statistics and biology, including algorithms for protein sequence analysis, DNA sequence motif finding, gene expression analysis, and regulatory network elucidation that have become important tools for computational biologists."

William F. Eddy, John C. Warner Professor of Statistics (Emeritus) in the Department of Statistics at Carnegie Mellon University, is the 2016 winner of the Jerome Sacks Award for Cross-Disciplinary Research for "serving as a model statistician engaged in cross-disciplinary research, including his pioneering work at the interface of statistics and computing, his research over several decades on functional Magnetic Resonance Imaging (fMRI) data, his contributions to the analysis of census data and statistics in forensic science, and especially for introducing hundreds of undergraduate and graduate students to cross-disciplinary research outside the classroom."

Stephen Fienberg, Maurice Falk University Professor of Statistics and Social Science in the Department of Statistics, the Machine Learning Department, and Cylab, and co-Director of the Living Analytics Research Center at Carnegie Mellon University received the 2015 Jerome Sacks Award for Cross-Disciplinary Research. Fienberg was recognized "for a remarkable career devoted to the development and application of statistical methodology to solve problems for the benefit of society, including aspects of human rights, privacy and confidentiality, forensics, survey and census-taking, and more; and for exceptional leadership in a variety of professional and governmental organizations, including in the founding of NISS."

Terry Speed, head of bioinformatics at the Walter and Eliza Hall Institute for Medical Research in Melbourne, Australia, is the recipient of the 2014 Jerome Sacks Award for Cross-Disciplinary Research. Dr. Speed is “a pioneer in the development and application of statistical methods for the analysis of biomedical and genomic data. His work exemplifies the best of applied statistics in cross-disciplinary research and is notable for its creativity, rigor, and relevance.”

Kenneth P. Burnham, retired from US Geological Survey, and currently Professor Emeritus at Colorado State University, is the 2013 Sacks Award winner "for outstanding and influential contributions to statistical ecology with novel methods of inference, data analysis, and computation used throughout the world".

Emery N. Brown, MD and PhD from MIT and Harvard received the Sacks Award in 2011 for "path-breaking statistical analysis of neuronal data; for the introduction of adaptive filtering/dynamic modeling to explain neuronal firing times; and for a unique role as an MD/Ph.D. working on biomedical problems while maintaining a human studies clinical practice."

In 2010, Sallie Ann Keller from Rice University received the Sacks award at the JSM 2010 reception in Vancouver, British Columbia for "her pioneering work in cross-disciplinary research in reliability and computational technology for complex systems of critical national security and for her leadership in forging research relationships in new areas for statisticians in government and academia.”

Ram Gnanadesikan, formerly with Bell Laboratories and Bellcore, was presented the Sacks Award at JSM 2009 in Washington, DC for "his pioneering work in multivariate data analysis, and for helping people to recognize the importance and the central role of data in statistics".

At JSM 2008 in Denver, CO, the 2008 Sacks Award was presented to John Rice from the University of California at Berkeley "for outstanding, diverse cross-disciplinary contributions to ion channel receptors, energy demand, transportation, astronomy and functional data analysis".

Cliff Spiegelman, from Texas A&M, was awarded the 2007 Sacks Award "for outstanding cross-disciplinary contributions to the statistical sciences, chemometrics, forensics, transportation and environmetrics".

In 2006, Adrian Raftery of the University of Washington received the Sacks Award for "outstanding contributions at the interface of the statistical sciences and the social, environmental and health sciences, as well as methodological research on Bayesian model selection and averaging."

C.F. Jeff Wu of the Georgia Institute of Technology was presented the award in 2005 for "outstanding statistical contributions to the design of experiments and quality improvement, and for bringing sound statistical ideas and applications to the engineering sciences."

In 2004, Douglas Nychka of the National Center for Atmospheric Research (NCAR) received the award for his "outstanding contributions to the statistical sciences, both theory and practice, atmospheric science, climatology, environmetrics and the geosciences."

The 2003 award was presented to Raymond Carroll of Texas A & M University for his "outstanding cross-disciplinary contributions to the statistical sciences, epidemiology, public health, nutrition, molecular cell biology and environmental toxicology."

The inaugural award was presented to Professor Elizabeth Thompson of the University of Washington at the NISS reception at JSM 2001 in Atlanta, for her "sustained, high-quality cross-disciplinary research bridging the statistical sciences and genetics."