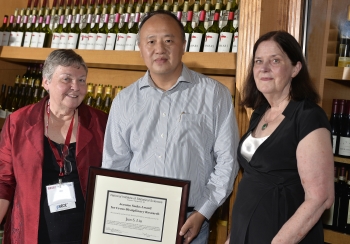 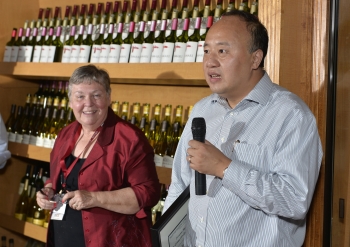 Every year, the NISS Awards Committee invites nominations for the award. The nominations are reviewed by the committee and then the most qualified candidate is selected as the winner. Liu was selected for his groundbreaking research contributions at the interface of statistics and biology, including algorithms for protein sequence analysis, DNA sequence motif finding, gene expression analysis, and regulatory network elucidation that have become important tools for computational biologists.

Receiving the award, Dr. Liu said, “I feel extremely honored to be a recipient of the Jerome Sacks Award. Looking at the name list of former Sacks Award recipients and their achievements, I also feel so much humbled. This award is to celebrate achievements in interdisciplinary research. By its nature, it is not just for me. It is for all those who have taught me science, who have accepted me into their research teams, and all those scientists who have appreciated my statistical contributions.”

Dr. Liu received his BS degree in mathematics in 1985 from Peking University and Ph.D. in statistics in 1991 from the University of Chicago. In 2002, Dr. Liu won the prestigious COPSS Presidents' Award which is given annually to one individual under the age of 40. In 2010, he was awarded the Morningside Gold Medal in Applied Mathematics. The International Chinese Statistical Association honored him with the Outstanding Achievement Award in 2012 and the Pao-Lu Hsu Award in 2016.

We live in the digital age of big data which is big in quantity and complex in structures and the underlying science. A big-data research project is almost surely interdisciplinary research, and will almost surely require interdisciplinary training and a collaborative spirit from the involved statisticians. I feel very fortunate to have participated in this type of research early in my career, and to see the growing importance of interdisciplinary research not only for science but also for the development of core statistical methodologies and thinking, says Dr. Liu.

The NISS Board of Trustees established the Jerome Sacks Award for Cross-Disciplinary Research in the year 2000 to honor Sacks' service as the founding director of NISS. The annual prize of $1,000, presented at the NISS JSM Reception, recognizes sustained, high-quality cross-disciplinary research involving the statistical sciences.