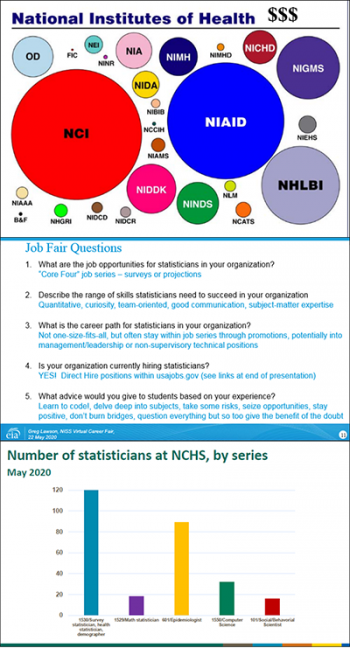 On Friday, May 22nd, over 30 NISS Affiliate colleagues gathered to hear from three distinguished and experienced statisticians from three different government agencies talk about their organizations, the work that they do and the qualifications required of prospective applicants.  And, yes, they all stated that there are positions open!

Interested in working as a statistician in the Federal government?  Read on!

Dean Follmann of the National Institute of Allergy and Infectious Diseases (NIAID) began with a quick review of the overall structure and organization of NIAID followed by a more in-depth review of the qualifications and the types of work employees engage in within the Biostatistics Research Group under Dean's direction.  These include large extramural projects that involve researchers outside of NIAID and also intramural projects with NIAID researchers.   He also reviewed the types of research that a new person might be involved in and the support that is in place to help them become assimilated into the group.  Dean also provided a couple of specific examples that demonstrated the breadth of work his group engages in.  These included a clinical randomized trial study which has led to the development of a new drug, the planning for evaluation of vaccines, and a diagnostic approach to identify if a person is infected – all involving statistical evaluation.  Dean concluded his remarks with a review of the skills his group is looking for, and the career paths that exist in his agency.

Greg Lawson from the Energy Information Administration (EIA) was the next speaker.  He provided a quick review of the types of products EIA produces and general roles that EIA engages in, and then how statisticians get involved in all of these.  This was followed by a description of the types of specialists that the EIA employs, most importantly a “core four”: Mathematical Statisticians, Survey Statisticians, Industry Economists and Operation Research Analysts.  Perhaps the most interesting part of Greg’s remarks focused on his unique journey from atmospheric science, to working with weather and climate on Mars, to working for an energy company and eventually to the study of energy for the government!  All of these positions involved his base set of skills in statistics, modeling and making estimates and predictions. He concluded his remarks by directly addressing the questions that were posed to all of the speakers.

Jennifer Parker from the National Center for Health Statistics (NCHS) was the final speaker.  She began with a review of the National Center for Health Statistics, the agencies’ overall goals and a few examples of what her agency produces. She described the National Vital Statistics System and a number of major population health surveys that her agency administers and the role these data sources play in the types of statistical activities and research she and her colleagues are involved in. She followed this with a review of the various job titles associated with NCHS, the job opportunities and type of research topics that are being done at NCHS.  She too used her own career path to emphasize important pieces of advice for prospective job applicants.

A number of crucial questions followed the presentations including, “What role does natural language processing play at NCHS?”  “What programming skills or languages should a candidate know and be able to use?” “Are these positions only open to US citizens?”, “What professional development opportunities are available?” and several others.  Below you will find a recording of this session in which you can review the entire conversation.

Nathan Cruze, Mathematical Statistician in the Research and Development Division at USDA’s National Agricultural Statistics Service (NASS) served as the moderator for this session.  He presented questions that were asked by NISS Affiliate attendees and there were quite a few additional comments, advice and guidance that was shared at the end of the session.  Nathan also suggested in his opening remarks that attendees might find the following links helpful:

Below you can find a recording of this session along with copies of the slides that the speakers used. The slides not only provide you with the key points that were offered but also include links to additional resources that should not be ignored!

These include lots of links to resources for career opportunities for statisticians in government.

Dean Follmann: "Statisticians at the National Institute of Allergy and Infectious Disease"