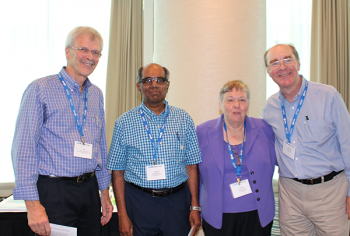 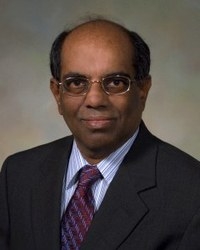 The Jerome Sacks Award is given for statistical leadership in cross-disciplinary research.

“His vision and effort in building the field of astrostatistics is outstanding!”

Mary presented Jogesh’s contributions to research as part of the NISS – SAMSI – MBI reception held at JSM in Vancouver.

Mary's presentation listed some of the specific contributions Jogesh has made to the field of astrostatistics including:

His work has indeed created a new hybrid discipline.

As a part of this work, besides doing the science, he has importantly built essential relationships with astronomers. His summer schools have taught statistical skills to more than 420 astronomers, he has established a valued biennial astrostatistics conference, he has secured large amounts of funding from the NSF and various foundations, and he has recruited some of the best young statisticians to work in this field.

In addition, Jogesh’s long record of outstanding productivity and service to our profession shows no sign of slowing.  He continues to publish on resampling theory, quantiles, statistical models with Bernstein polynomials, the probabilistic number theory associated with Ewens' sampling formula, and goodness-of-fit tests. Many of these papers, especially those undertaken in the last 15 years, are motivated by or specifically relevant to applied problems in astrostatistics.

Jogesh Babu joins a long list of exceptional researchers that have won the Jerome Sacks Award for Cross-Disciplinary Research.  He is an outstanding statistician whose interdisciplinary work has created a new scientific field.

"For his vision and dedication in helping to build the astrostatistics community for more than two decades, his commitment to young researchers in the field, and his research contributions to the analysis of astronomical data."