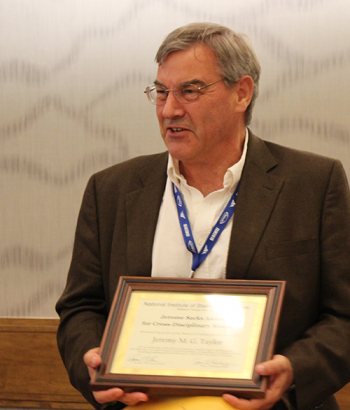 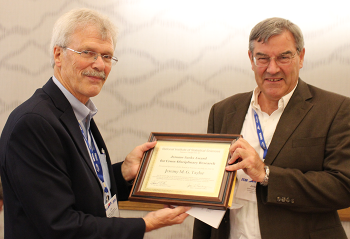 The NISS Board of Trustees established the Jerome Sacks Award for Cross-Disciplinary Research in 2000 to honor Jerome Sacks' service as the founding Director of NISS. The annual prize of $1,000 was presented at the NISS / SAMSI Reception at JSM 2019 in Denver.  The award recognizes sustained, high-quality cross-disciplinary research involving the statistical sciences.

Dr. Taylor has published over 350 peer-reviewed papers in a long list of over 100 premier statistical, medical and oncology journals.  He has made major methodological contributions in longitudinal models, survival analysis, analysis of biomarkers and novel models for personalized medicine.  For instance, he created a prediction calculator for prostate cancer for non-statisticians.

Dr. Taylor earned the Mortimer Spiegelman Award for best biostatistician under age 40 in 1996, and the Michael Fry award for best researcher under age 40 by the Radiation Research Society – the only Statistician to achieve this distinction. He has also made major contributions to research in HIV AIDS, and head and neck, lung and prostate cancer.  He has advised over 34 Ph.D. students and has mentored many colleagues now in leadership positions. He served as editor of Biometrics and Chair of the NIS BMRD study section for years and is a member of many international societies.

“For his leadership in the field of biostatistics and his major methodological contributions in a wide array of statistical problems of importance in medical science, including fundamental contributions to AIDS/HIV and cancer research.”

It is with great admiration and honor that NISS is able to confer upon Dr. Taylor recognition of his exemplary achievements throughout his career to date.