NISS Spreads its Wings at the JSM 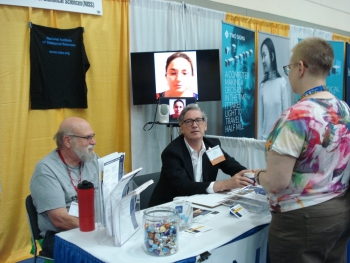 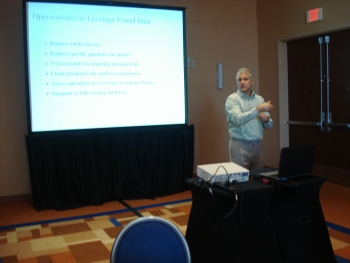 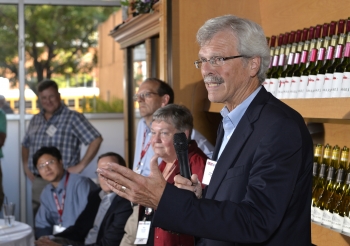 NISS' participation in one of the largest Joint Statistical Meetings (JSM) held in Baltimore, Maryland, from July 30th to August 3rd, 2017, was a success and well-attended.

NISS kicked off the event on Sunday by hosting a Luncheon Workshop for Affiliates attended by more than 40 members who actively participated in the workshop. Nell Sedransk, NISS Director of the DC office, opened up the luncheon workshop by welcoming and thanking Affiliates and prospective Affiliates for being a part of the workshop. Sedransk and David Banks, NISS Assistant Director, made a few announcements about NISS services, courses, and expansion plans.

At the Affiliate Luncheon after the introductions, Sedransk honored NISS Board Member Phillip Kott with the NISS Distinguished Service Award recognizing his extraordinary service that significantly advanced NISS and its mission. Speaking about Kott’s contributions, Sedransk said, “Phil has spearheaded the development and continuing success of the NISS series of Fall Conferences on Contemporary Issues in Survey Sampling.  These have attracted participants from all sectors, government, industry and academia; and have continued to expand as they address technical advances and practical implementations for large-scale surveys and smaller, specialized data collections.”

Following lunch, two presentations were made: NISS Board Member and H20 Chief Scientist Leland Wilkinson presented on "Data Analysis, Statistics, Machine Learning," and NISS Senior Mentor and Professor of Statistical Science at Duke University Jerry Reiter presented on "Big Data in the Federal Government." Both the presentations generated a lot of interest and were followed up with floor discussion and questions.

NISS Board Chairwoman Mary Batcher honored two Postdoctoral Fellows for their distinguished careers in statistics. Professor Min-ge Xie of Rutgers University, was recognized for his research on the foundations of statistics and his longstanding commitment to his students and the profession; and Dr. Gomatam, a statistician with the Food and Drug Administration, was recognized for her unique career pathway to the federal government and honored for her contributions to the review and approval of safe and effective medical products.

One of the highlights of the reception was the announcement of the new NISS Director. On behalf of the NISS Board, staff and members, Batcher welcomed Jim Rosenberger as the new NISS Director. Rosenberger will succeed Sedransk, who will continue to be the director of the NISS DC office.  Rosenberger received a big round of applause with many of the attendees expressing their desire to work with him in the near future. In his message to the gathering, Rosenberger said, "I am very pleased to join NISS and look forward to working with our affiliates to build stronger connections between industry, government & academia about Data Science and Statistics."

The NISS Expo Booth, which was open on all event days from 9 a.m. to 5:30 p.m., generated a lot of interest among JSM Expo attendees who visited the booth to learn more about NISS and about the various opportunities to engage with NISS.  Additionally, many students from different universities stopped by the NISS Booth looking for a career, fellowship and internship opportunities with NISS.  We would like to thank everyone who visited us.

All in all, "I am very pleased by the keen interest in NISS and the support expressed by the many visitors to the NISS booth," says Rosenberger. Speaking about NISS’ presence nationally and its expansion plans, Rosenberger says, "Our presence at the JSM provided an opportunity to clarify and amplify that NISS has moved beyond a single location in North Carolina, and now has its major office in Washington, DC.  For the future, NISS will be developing a HUB at Penn State and planning additional locations in the northeast and the west coast."