NISS Webinar Reviews Alternatives to the Traditional p-value to a Packed House! 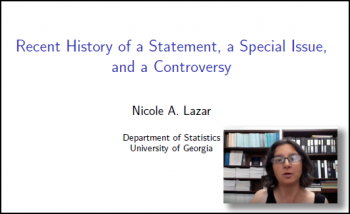 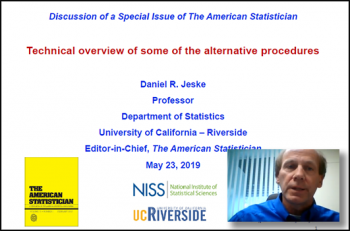 The NISS Affiliates Committee organized and on May 23, 2019 broadcast a webinar that got the attention of many statisticians across academia, business and industry! Over 500 statisticians and others attended the Live Zoom session and another 150 or so took advantage of the LiveStream of the session via YouTube. The p-value topic is not a new one -- in fact it has been under discussion for decades.  However, the recent controversy about their usefulness brings additional scrutiny that is deserved and timely.  However, the questions that arise concerning what alternatives should replace them is where additional controversy comes into play.

As you may know, the ASA has taken a leading role in helping provide momentum and energy around this issue. In response to the discussion at a conference two years ago that focused on the merit of using p-value, the ASA published: "The ASA's Statement on p-Values: Context, Process, and Purpose." Since that time, many statisticians have been thinking and writing about alternatives to the traditional p-value. This work has culminated in the publication of a special online issue of The American Statistician. The title of this special issue is "Statistical Inference in the 21st Century: A World Beyond p < 0.05".  This special issue features 43 papers on alternatives to p-values.

The focus of the NISS webinar was providing a synopsis of these alternative ideas and the discussion that surrounds these ideas.  The first speaker was Nicole Lazar (University of Georgia) whose talk was entitled: "Recent History of a Statement, a Special Issue, and a Controversy."  As one of the editors of this special issue her insight was especially meaningful.  She contended that the replicability / reproducibility crisis is something that statisticians and scientists need to address and the ASA is trying to help bring this issue to the fore.

Nicole was followed by Daniel Jeske, (University of California, Riverside).  Having carefully reviewed each of the papers that were published in this special issue of the American Statistician, he took up a good part of webinar's time providing insight into the alternatives that he thought were especially intriguing. Dan's explanations were particularly helpful because of his unique ability to make some of these rather complex ideas accessible to others.  His presentation was titled: "Technical overview of some of the alternative procedures found in the special issue of The American Statistician."

Perhaps the toughest job of the session was tackled by Jessica Utts, (University of California, Irvine) who was asked for her advice regarding how we begin to think about implementing change.  Her talk was titled: "How we might teach and influence inter–disciplinary collaborations."  As part of her talk she shared four recommendations for what statisticians and educators can do to start to work on this.  Each of these has a basis for getting involved in something, and that is exactly what she encouraged - get involved in the discussion!

Moderator Esra Kurum, (University of California, Riverside) fielded many questions from the audience through the various chat and Q&A mechanisms that were set up to capture the thoughts of the attendees of the webinar, both after each of the speakers and at the end of the webinar.   It became clear from the questions and the speaker’s comments that the next step for concerned statisticians is to take advantage of the papers in the special issue, review them and then start sharing your thoughts with others.

For those who were not able attend the live session, you will find a recording of the session below as well as links to the slides from each of the speakers.

NOTE:  Please be sure to provide the proper attribution for the author's work if these slides are used for teaching or other purposes.

Daniel Jeske is a Professor in the Department of Statistics at the University of California, Riverside (USA), where he served as the department chair during 2008-2015.  He is an elected fellow of the American Statistical Association and served on the board of directors during 2014-2016  He is the Vice-President of Membership for the International Society of Business and Industrial Statistics (ISBIS), a society of the International Statistical Institute (ISI).  He was an Associate Editor for The American Statistician for 8 years before becoming Editor-in-Chief in 2018. He is an Associate Editor for Applied Stochastic Models in Business and Industry and a member of the Program Affiliates Committee of the National Institute of Statistical Sciences (NISS).  His research interests include classification and prediction methodologies, longitudinal data modeling, statistical process control methodologies, biostatistics applications, and reliability modeling.

Jessica Utts is a Professor Emerita in the Department of Statistics at University of California, Irvine and was the 2016 President of the American Statistical Association. She served as Chair of the UCI Statistics Department for 5 years, and led the department in initiating a major in Data Science. Her honors include being an elected Fellow of the ASA, the Institute of Mathematical Statistics, the American Association for the Advancement of Science, and the Association for Psychological Science. She is the recipient of the ASA Founder’s Award, the IMS Harry C. Carver Medal, the Distinguished Service Award for the National Institute of Statistical Sciences, and two awards for distinguished teaching. She has served as President of the Western North American Region of the International Biometric Society (WNAR), Chair of the Committee of Presidents of Statistical Societies (COPSS), and is currently on the Council of the International Statistical Institute (ISI). She has a long-standing interest in promoting statistical literacy, and has published three statistics textbooks with that emphasis. In addition to statistics education her research involves applications of statistics to a variety of areas, most notably parapsychology, for which she has appeared on TV shows including Larry King Live, Nightline and CNN News.