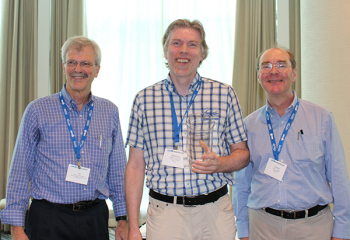 At the NISS – SAMSI – MBI reception that was held during JSM Jim Rosenberger, Director of NISS, presented the NISS Distinguished Alumni Award to Matthias Schonlau, Professor of Statistics at the University of Waterloo in Canada.

Prior to his appointment as full professor at the University of Waterloo in 2011, Matthias worked at the RAND Corporation in Pittsburgh, PA and in Santa Monica, CA for 12 years.  At RAND he worked as a research and consulting statistician whose focus was on survey methods, especially web surveys.  He had also spent a year at the Max Planck Institute for Human Development and the German Institute for Economic Research in Berlin.

Administratively Matthias served as head of the RAND Statistical Consulting service for 7 years and as Co-director of the Survey Research Center at the University of Waterloo for 4 years.

Matthias is currently serving as president of the Survey Methods Section of the Statistical Society of Canada, 2015-18, as a board member of European Survey Research Association (ESRA) for 6 years, 2011-17, and is currently associate editor of the journal Survey Research Methods (2015-present).

Matthias has more than 70 peer reviewed research publications that have received over 10,000 citations.

His postdoctoral experience with NISS occurred from 1997-1999 at the AT&T Laboratory in Florham Park, NJ, under the supervision of Daryl Pregibon, where he worked on computer intrusion detection.  While it might not seem like that long ago, Mathias has certainly come a long way since his involvement with NISS!

The citation for this award reads:

"Honoring his distinguished career as a research statistician in both industry and academia, especially his contributions in the area of survey methodology."