August 25, 2014, Research Triangle Park, NC - Dr. Terry Speed, head of bioinformatics at the Walter and Eliza Hall Institute for Medical Research in Melbourne, Australia, is the recipient of the 2014 Jerome Sacks Award for Cross-Disciplinary Research. The award is given by the National Institute of Statistical Sciences (NISS) to recognize “sustained, high-quality cross-disciplinary research involving the statistical sciences.” The award was announced at the 2014 Joint Statistical Meetings (JSM) in Boston, Massachusetts. 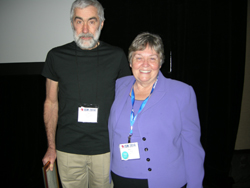 The Awards Committee of the NISS Board of Trustees selected Speed as this year’s award winner, citing him as “a pioneer in the development and application of statistical methods for the analysis of biomedical and genomic data. His work exemplifies the best of applied statistics in cross-disciplinary research and is notable for its creativity, rigor, and relevance.”

Professor Speed’s research focuses on the application of statistics to problems in genetics and molecular biology. He has spent years looking at the mapping and expression of genes in mice and humans, including disease genes and genes contributing to other traits. He spent much of his career at the University of California, Berkeley, the University of Sheffield, the University of Western Australia and the CSIRO. Speed’s mathematical expertise also has been used in many high-profile court cases including the 1994 O.J. Simpson trial. He is on the editorial board of the Journal of Computational Biology, JASA, Bernoulli and the Australian and New Zealand Journal of Statistics.

The Jerome Sacks Award was created in 2001 in honor of Jerome (Jerry) Sacks, the founding director of NISS. As Sacks award recipient, Speed receives $1,000, and his name is added to a plaque at NISS that lists all recipients of the award.

About NISS
The National Institute of Statistical Sciences was established in 1990 by the national statistics societies and the Research Triangle universities and organizations, with the mission to identify, catalyze and foster high-impact, cross-disciplinary and cross-sector research involving the statistical sciences. NISS is dedicated to strengthening and serving the national statistics community, most notably by catalyzing community members’ participation in applied research driven by challenges facing government and industry. NISS also provides career development opportunities for statisticians and scientists, especially those in the formative stages of their careers. In particular, NISS has appointed more that 70 postdoctoral fellows with graduate training in statistics, computer science, mathematics, environmental sciences, psychometrics and transportation. NISS is located in Research Triangle Park, North Carolina.
For more information about NISS see www.niss.org. You can also learn more by following our Twitter account, @NISSSAMSI, or by joining the NISS group on LinkedIn and on Facebook.