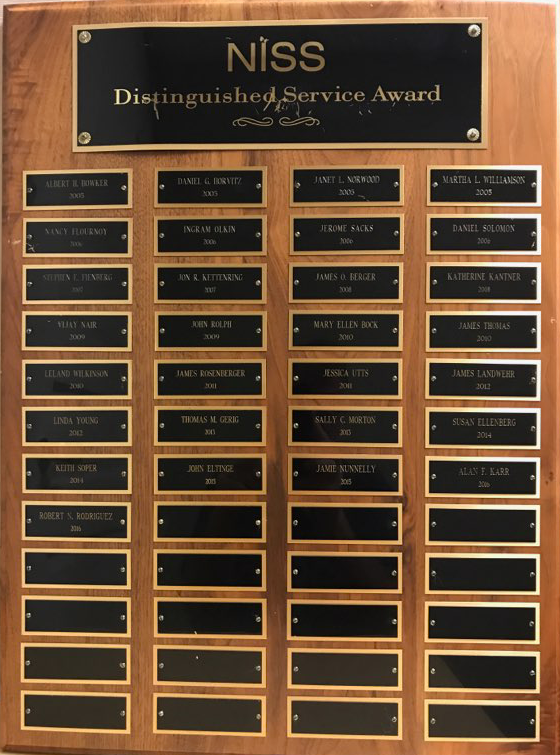 The NISS Distinguished Service Awards were established by the Board of Trustees in 2005 to recognize individuals who have given extraordinary service that significantly advances NISS and its mission. Each year, one or more recipients are chosen by a committee composed of the Vice-Chair of the Board, the chair of the Awards Committee of the Board and the Director. Each receives a memento and has his or her name added to a plaque in the NISS office.

Citation for the 2022 Winner

JAMES G. BOOTH :  Professor James (Jim) Booth for his dedicated service on the NISS board of trustees, serving three terms as the IMS Member of the Corporation, chairing the Awards and Nomination Committee, and since 2021 serving as chair of the board of trustees as an elected board member.

Citation for the 2021 Winner

RAYMOND P. BAIN: Dr. Raymond Bain for his exceptional and dedicated service on the NISS board of trustees, serving as the chair of the strategic planning committee, chair of the finance committee, vice-chair, and chair of the board for the past two years. And for his strong support of NISS including the NISS-Merck meetups.

Citation for the 2020 Winner

CHRISTY CHUANG-STEIN: Dr. Christy Chuang-Stein for her distinguished service to NISS serving two terms on the board of trustees, for her excellent leadership as chair of the Affiliates Committee for three years, and as vice-chair of the board this past year. Christy established planning committees in both the Academic and Government Affiliate Programs and led the efforts to expand and enrich the value proposition for Affiliates in both programs through activities such as Meetups, webinars and career fairs.

Citations for the 2019 Winners

MARY BATCHER: Dr. Mary Batcher, For distinguished service to NISS serving two terms on the board of trustees and four years as chair of the board.  Serving with constant optimism and confidence in the staff and board.

NELL SEDRANSK: Dr. Nell Sedransk, NISS Director of the Washington DC office since 2017, received the 2019 NISS Distinguished Service Award for distinguished service to NISS and our affiliates since 2005, serving as director, providing mentoring for postdocs and research associates, and leading expert panels to address critical issues.

Citations for the 2017 Winners

PHILLIP KOTT: Dr. Phillip Kott, a Senior Research Statistician at the Research Triangle Institute International's Center of Excellence for Complex Data Analysis, received the 2017 NISS Distinguished Service Award. Kott has been serving on the NISS Board of Trustees since 2011. The award recognizes Kott's extraordinary service that advances NISS and its mission.

Citations for the 2016 Winners

Citations for the 2015 Winners

JOHN ELTINGE: Eltinge received the award for bringing insight and implementing the vision for NISS as a multi-sector institute, especially through his leadership in the Affiliates Program.

JAMIE NUNNELLY: Nunnelly received the award for her role in dramatically increasing the visibility of NISS, for engaging the next generation of statisticians in NISS and for modernizing NISS communications, especially through design of the new website.

Citations for the 2014 Winners

SUSAN ELLENBERG: A former Chair of the NISS Board of Trustees from 2011 to 2014, Dr. Ellenberg was given the award for helping lead NISS through “exciting and challenging times, always with common sense, wisdom and good humor”. Ellenberg is Professor of Biostatistics, Department of Biostatistics and Epidemiology, University of Pennsylvania Perelman School of Medicine, and formerly held leadership positions at the FDA and NIH.

KEITH SOPER: Soper was recognized for his long-term service to NISS as a two-term member of the Board of Trustees. He served on the executive committee and was also chair of the affiliates committee during 2013-14. “You have helped NISS re-invigorate the Affiliates Program, and to move it in new and important directions.”

Citations for the 2013 Winners

SALLY MORTON: The award recognizes your long-term service to NISS as a member of the Board of Trustees,the Executive Committee and the Nominating Committee, as well as your being chair of National Presence Committee, which helped NISS move in directions in which it needed to move. Now, as a member of the Affiliates Committee and the SAMSI Governing Board, you are helping both institutes to continue on a positive trajectory.

Citations for the 2012 Winners

JIM LANDWEHR, who works at Avaya Laboratories, was recognized for his many years of serving on the NISS Board of Trustees, which include chairing the Board for three years and serving this past year as chair of the Board’s Affiliates Committee.

LINDA YOUNG, professor of statistics at the University of Florida, was acknowledged for her service on the Board of Trustees and leadership role in the NISS-NASS research program, which ran from 2009 to 2011.

Citations for the 2011 Winners

JAMES ROSENBERGER, for long-term service to NISS as a member of the Executive Committee and for the last two years as chair of the Finance Committee, for his and his department’s support of NISS and SAMSI through the Affiliates Program, and for Penn State's having hired more ex-NISS postdocs as faculty members than any other department!

JESSICA UTTS, whose service to NISS takes so many forms that it is hard just to list all of them. These include multiple terms on the Board of Trustees and the Executive Committee, chairing the Awards Committee, and three years of devoted service as Vice-Chair of the Board. Her advice, support and unwavering belief in NISS have helped immeasurably as we have progressed over the past 21 years.

Citations for the 2010 Winners

MARY ELLEN BOCK: In recognition of multiple forms of service to NISS, including several terms on the Board of Trustees and the Executive Committee, her seminal role in the formation of the affiliates program, and her chairing the Awards Committee for the past two years. Her efforts on behalf of SAMSI, most recently as a member of the search committee for the new director, have also manifestly benefitted NISS. Speaking personally, the intangibles—her belief in NISS and her advice and support for me—have helped NISS immeasurably we have progressed over the past ten years.

JAMES THOMAS: For his long-term service as computational systems manager of both NISS and SAMSI. We would just not have been able to function, let alone thrive as we have over the past ten years, without his devoted attention to our computing and communication needs. There has never been a time—no matter how late or early, how bad the weather, or how vexing the problems—that he was not there for us. That he dealt with sometimes massive challenges with grace, patience and good humor is further indication what a treasure he is to NISS and SAMSI.

LEE WILKINSON: In recognition of too many forms of service to NISS to list. The most notable things, of course, are his four years as Vice-Chair of the Board of Trustees, seven+ years as chair of the Affiliates Committee, and at least six years on the Executive Committee. Equally important, he has been a major force in several affiliates workshops and formation of the affiliates clusters. Speaking personally again, his wise counsel and support have helped me have the confidence to move NISS forward.

Citations for the 2009 Winners

VIJAY NAIR: For service to NISS as chair of the Board of Trustees during nearly all of the building addition project, a leading role in development of the 2004 strategic vision and the 2007 strategic positioning study and focus on more, and more transparent, ways of engaging the statistics community—especially the university affiliates—in NISS' activities.

JOHN ROLPH: For service to NISS as a long-term member of the Board of Trustees and leadership within the Board, which has included chairing the Science Committee and, especially, chairing the Finance Committee throughout the building addition project, as well as wise counsel that has helped NISS remain sound financially at the same time as we have thrived scientifically.

Citations for the 2008 Winners

JAMES BERGER: for your innumerable, long-term contributions to NISS, which ranging from leading NISS projects on computer model evaluation to your unending efforts to ensure that the NISS/SAMSI relationship works to the benefit of both institutes.

KATHERINE KANTNER: recognizing contributions to NISS that are too numerous to list, which include the web site, dealing with affiliates and especially the effective, graceful way in which you handled what seemed like an endless series of events in the spring of 2008.

Citations for the 2007 Winners

STEPHEN E. FIENBERG: for long-term support of NISS, including long-time membership on the Board of Trustees, service on major board committees (and chairing the 2000 director search committee), leadership of digital government research, and persistent willingness to speak positively about NISS. And throughout, you have engendered civility and humor within NISS.

JON R. KETTENRING: for long-term contributions to NISS, including your willingness to support NISS visibly in many contexts (among them, your 1997 ASA presidential address), your seminal role in creation of the affiliates program, your extraordinary stint as chair of the Board of Trustees, and your ceaselessly positive outlook about the future of NISS. Your help has been invaluable.

Citations for the 2006 Winners

NANCY FLOURNOY: for many roles in the formation of NISS, long-term service on the Board of Trustees, and continuing strong support of the NISS/SAMSI affiliates programs.

INGRAM OLKIN: for multiple roles in articulating the importance of cross-disciplinary research involving the statistical sciences, catalyzing the formation of NISS, participating in NISS projects and stimulating a continuing NISS presence in the social sciences.

JEROME SACKS: for extraordinary service as founding director of NISS, setting the scientific standards and tone for NISS, and bringing the NISS building to reality.

DANIEL SOLOMON: for long-term devotion in NISS in ways that are too numerous to list, but include preparation of the proposal to locate NISS in Research Triangle Park, serving as vice-chair of the NISS Board of Trustees and chair of the SAMSI Governing Board, being a repository of NISS history, and throughout having challenged NISS to succeed.

Citations for the 2005 Winners:

ALBERT H. BOWKER: Your role in the creation of an institute dedicated to cross-disciplinary research involving the statistical sciences, including chairing the site selection committee, and service as initial chair of the Board of Trustees of NISS.

DANIEL G. HORVITZ: Your roles in helping produce the North Carolina proposal for NISS, in creating NISS as a functioning organization, as the first treasurer of NISS and on the 1997 NISS building committee, as well as your long-term support of NISS leadership.

MARTHA WILLIAMSON: Your extraordinary devotion to NISS as administrative assistant since 1992, as well as your unflagging optimism about the future of NISS.