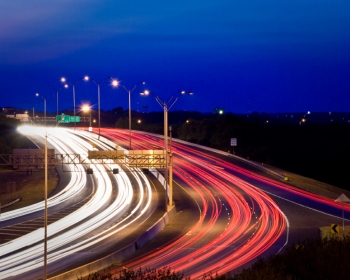 Users of the nation’s road and highway network are increasingly dependent on estimates of travel times from where they are to where they want to go. Such information is available from traffic system managers and commercial sources, and multiple mechanisms ranging from variable message signs to GPS to smart phones. The information is valuable to individuals, and essential to companies such as FedEx and UPS, as well as transit services. Although utility functions are elusive, there are costs from poor information: a missed plane or a late delivery is not merely an inconvenience, and an early arrival to a just-in-time manufacturing facility costs real money.

Typically, travel time information consists of one number: an estimated time to go from point A to point B. Sometimes there is a range of numbers, such as 18-25 minutes, although what these numbers represent is almost never clear. The central point is that these point estimates are uncertain; the uncertainty is termed “travel time reliability.” Measures of travel time reliability need to reflect the multiplicity of data sources (on the system side, in-pavement detectors, radar and video, and on the vehicle side, GPS, electronic toll collection devices and Bluetooth), each of which has its own, non-trivial quality issues.

The principal statistical issues, on which the NISS engagement in the project focuses, are:
• Estimation of entire travel distributions (not just means and variances) for individual road segments (example: from one exit to the next on a freeway, or a block on an urban arterial), from the multiple sources of data, also accounting for external factors such as weather, construction, accidents and special events.
• Combining estimated travel distributions for segments into estimated distributions for routes, which requires characterizing dependence among segments.
• Bayesian and other methods for updating estimated distributions as additional data become available.
• Creation of software prototypes implementing the theory and methodology.