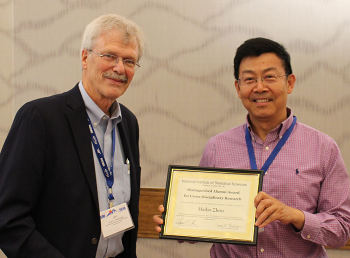 For the past couple of years NISS has been recognizing former NISS Postdocs or Research Associates who have been active after their opportunity with NISS for more than 10 years and have had distinguished careers.  This year’s recipient of the NISS Distinguished Alumni Award is Professor Haibo Zhou.

Dr. Zhou earned his Ph.D. in 1992 from the University of Washington, Seattle and then served as a NISS Postdoc from April, 1993 through December, 1994.  He received the Intramural Research Training Award and became an IRTA Fellow for the Biostatistics Branch, National Institute Environmental Health Sciences (NIEHS), Research Triangle Park, North Carolina, 1995-1996.  He then joined the Department of Biostatistics at UNC Chapel Hill.  He has over 150 refereed cross-disciplinary publications.  He has mentored 11 Postdocs and 9 Ph.D. students.

“Honoring his distinguished career, his contributions as a research biostatistician, especially in environmental statistics, outcome-dependent sampling, and reproductive epidemiology.”