Rcpp (R and C++) the Focus of Online Tutorial 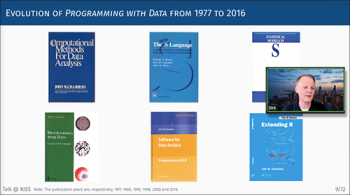 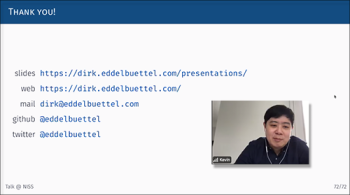 At the start of his talk, Dirk Eddelbuettel (Senior Data Scientist / Engineer, TileDB) shared a bit of his background and included his journey to how he got started on Rcpp. He eventually made the big step to become an author and uploaded one package to CRAN, then a few more followed afterwards. According to Dirk, Rcpp has been the most successful of those, the most impactful, and had the most effort behind it. The publication on Rcpp was a team effort with a number of people, and it hugely benefited from their work as well.

Dirk opened up the tutorial on "How to use Rcpp" by providing an overview of some historical context of Rcpp. During his presentation he focused on why we would use Rcpp and shared some brief notes on the first steps on how to use it. He also shared publications on the evolution of programming with data from 1977 to 2016 explaining that R is really an interface for working with data.

What Dirk presented during this tutorial are the really easy first steps for Rcpp, and he explained that there are many technical materials behind what he presented. He emphasized that this is just a beginning, and there are many more technical methods  to learn. He provided helpful resources for those interested in learning more.

During the tutorial, Dirk explains that C++ is a very helpful language as well to use due to its wide use and it also has a good tool support (debuggers, profilers, and code analysis). C++ is one of the most frequently used languages in science and research and is industrial strength, vendor independent and is still evolving to this day.

R gives us an entire infrastructure for us to compile code. There are small differences with using Rcpp but a lot of things actually remain the same, for instance Rcpp would now have ‘types’. Dirk portrayed an image showing a function in R versus in C++ via Rcpp for a side by side comparison as one example.

As it is very relevant in today’s statistics world, NISS is so thrilled that Dirk Eddelbuettel gave us an entrance into Rcpp, and we hope to do more on this topic in the future.

Those who have attended this tutorial will be given post-event access to the recording to use as a reference.

Did you miss this event? You may purchase the video recording through us! Reach out to officeadmin@niss.org for information.

Slides Used By the Speaker

"An Introduction to RCPP: A Hands-on Overview"